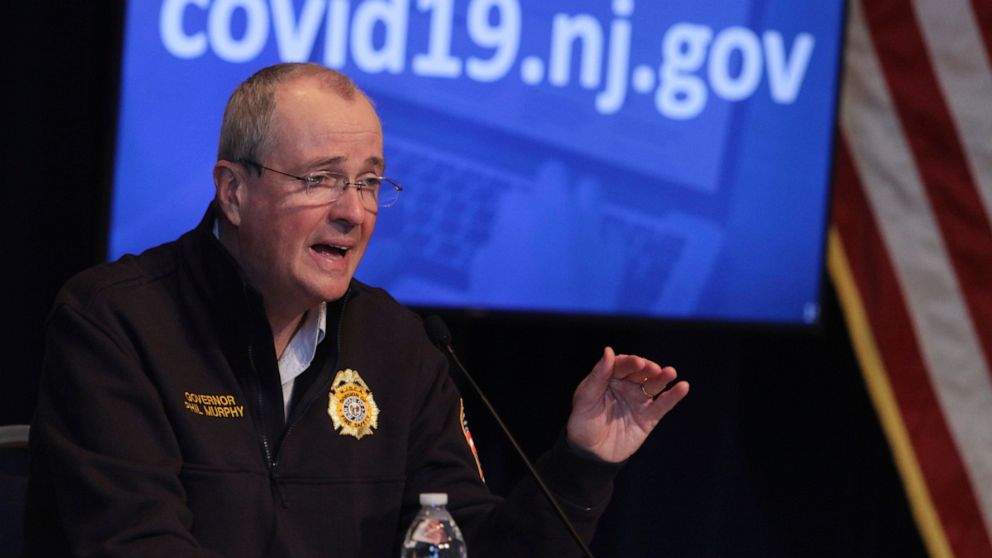 Coronavirus-related hospitalizations in Arizona peaked about a month ago. The latest hospitalization metrics posted by the Department of Health Services are trending down to mid-June levels.

— Canada-U.S. border closed for another month

— Rural families without internet face tough choice on school. Roughly 3 million students across the United States don’t have access to a home internet connection. For some, it is simply too expensive or there’s no wi-fi.

— A federal judge threw out a lawsuit by an Arizona woman who claimed New York’s quarantine requirement for travelers from hotspot states infringed on her “fundamental right to travel.”

— NBA players at the Walt Disney World campus have been safe, with no players testing positive for the coronavirus since arriving in early July. Now some players whose teams missed the playoffs return home to virus hotspots.

MONTGOMERY, Ala. — Alabama health officials are encouraged by a decline in coronavirus cases a month after a statewide mask order.

Harris encouraged people to keep wearing masks. He says the numbers may be declining because the surge of cases after the July 4 holiday has ended and the statewide mask order in July “played a role” in lowering the numbers.

Dr. Don Williamson, the former state health officer who heads the Alabama Hospital Association, says the next concern is a possible spike when students return to schools and colleges and gather for the Labor Day weekend.

Williamson says while the number of coronavirus patients in hospitals has dropped, 89% of ICU beds are full.

WINDOW ROCK, Ariz. — Navajo Nation President Jonathan Nez is urging all schools on the tribe’s reservation to use online learning during the fall semester to help reduce the risk of spreading the coronavirus.

Nez’s statement cited all public and private schools, including charter schools, schools operated by the federal Bureau of Indian Affairs and those controlled by the tribe.

More than 9,300 confirmed coronavirus cases have been reported on the reservation, which includes parts of Arizona, New Mexico and Utah.

TORONTO — The Canada-U.S. border will remain closed to non-essential travel for at least another month.

The statement Friday by Public Safety Minister Bill Blair came a day after Mexico announced a similar measure for its border with the United States. The land border restrictions aimed at controlling the coronavirus pandemic were first announced in March and have been renewed monthly.

Many Canadians are concerned about a reopening. Canada has flattened the epidemic curve, reporting 9,000 deaths and 123,000 cases. The U.S. leads the world in confirmed deaths (167,00) and cases (5.2 million), according to a tally by Johns Hopkins University.

Essential cross-border workers such as health care professionals, airline crews and truck drivers are still permitted to cross. Americans and Canadians returning to their respective countries are exempted from the border closure.

Canada sends 75% of its exports to the U.S. and about 18% of American exports go to Canada.

The state health department reported 229 new confirmed deaths, bringing Florida’s death total to 9,276 since March 1. Over the past week, Florida has averaged 175 reported coronavirus deaths per day — only Texas was higher with 212.

Florida’s total confirmed cases is more than 563,000. The positivity rate for testing remains at 12.8% in the last week. The number of patients treated for coronavirus in Florida hospitals was 5,943 on Friday, down from a peak of more than 9,500 three weeks ago.

In the past month, COVID-19 has become Florida’s leading cause of death, averaging more than 140 reported fatalities per day. By comparison, the state health department says cancer and heart disease each average about 125 deaths per day.

HONOLULU — The Hawaii Department of Health has hired a new official to oversee the state’s maligned coronavirus contact tracing program.

The announcement follows a recent increase in Hawaii’s number of coronavirus cases and calls for the removal of state health director Bruce Anderson and state epidemiologist Sarah Park by Democratic U.S. Rep. Tulsi Gabbard. Democratic Lt. Gov. Josh Green has called for Park’s removal from management of the tracing program.

MONTGOMERY, Ala. — Alabama Gov. Kay Ivey’s chief of staff is quarantining at home after his wife tested positive for the coronavirus.

Ivey spokeswoman Gina Maiola says Ivey’s Chief of Staff Jo Bonner doesn’t have symptoms but is in quarantine at home. Bonner’s wife took a test after attending a visitation for a funeral last Friday in Mobile where she later learned several other attendees had tested positive. Janee Bonner doesn’t have symptoms of the virus, but the test was positive.

Maiola says Bonner was not with the 75-year-old Republican governor this week and Janee hasn’t been around the governor in several months.

BERLIN — Germany’s disease control center says a study of a previous coronavirus hotspot town indicates there were almost four times as many infections from an outbreak in March.

The Robert Koch Institute says recent blood tests conducted on 2,203 adults in the southwestern town of Kupferzell showed that 7.7% had antibodies for the coronavirus.

In March, about 100 people tested positive for the coronavirus with a swab test and three died following an outbreak linked to a church concert in Kupferzell, population 6,000.

The study’s authors say this indicates more people were exposed to the coronavirus than previously thought and developed antibodies. The authors note many people with the virus show only minimal or no symptoms.

Also, more than a quarter of the people tested who had confirmed COVID-19 later showed no antibodies. However, the authors say this doesn’t mean they didn’t have immunity to the virus.

ATHENS, Greece — Greek authorities issued a “strong recommendation” for people to wear masks for a week indoors and outdoors in public areas after returning from areas with high coronavirus cases.

Public gatherings will be limited to 50 people in all areas considered hot spots. A ban on restaurants, bars and nightclubs operating between midnight and 7 a.m. has been extended to cover much of the country, including the greater Athens area, until Aug. 24.

Also, Greek authorities say eight migrants have tested positive for coronavirus in a mainland camp for asylum-seekers in the northeastern Evros area. The Fylakio camp, which has about 200 residents near the Turkish border, was quarantined Friday.

Greece had a record-high 262 new infections on Wednesday. There’s been 6,400 confirmed infections and 221 total deaths.

ANCHORAGE, Alaska — Some churches in Alaska’s largest city have recently defied the emergency order limiting the size of gatherings to slow the spread of the coronavirus.

Anchorage Baptist Temple held in-person services Sunday, about a week after the emergency order took effect. Other churches saying they are not complying with the measure include the Wellspring Ministries and King’s Chapel in Eagle River.

Illa said after an emergency meeting Friday with leaders of Spain’s autonomous regions that authorities are shutting all discos and night clubs across Spain.

Visits to nursing homes are limited to one person a day for each resident for only one hour. People are prohibited from smoking in public areas if they are unable to keep at least 2 meters (6.5 feet) away from others.

Police will begin cracking down harder on banned night-time street gatherings by young people to drink alcohol. New daily cases in Spain have been steadily climbing since the country on June 21 ended a more than three-month lockdown.

Authorities have officially recorded almost 50,000 cases in the past 14 days, an average of about 3,500 new cases a day.

TRENTON, N.J. — New Jersey’s governor says the state will move to a nearly all-mail election this November, following the model it used for the July primary because of the coronavirus.

Democrat Gov. Phil Murphy said during an interview with CNN on Friday that all voters would get a ballot. It’s not clear if people who aren’t registered will get an application to register.

Murphy indicated the only in-person voting will be with provisional ballots. That means if voters want to cast their ballot in person, they’ll have to go to one of a reduced number of polling places and cast a ballot that will be counted only after officials determine the voter didn’t mail in a ballot.

If the July 7 primary model is used, voters can mail back their ballots to county boards of elections, deliver them there in person or use one of five drop boxes across the county.

The development comes a day after President Donald Trump acknowledged he’s starving the United States Postal Service of cash to make it harder to process millions of mailed-in ballots.

Health Minister Bent Hoeie says masks must be used in Oslo and in a municipality southwest of the capital starting Monday.

Nationally, Norway has 261 confirmed deaths related to the virus.

(This item has been corrected to show the ban on gathering of more than 20 people in Bergen, not Oslo.)

PARIS — The head of France’s national health service says Paris and Marseille have been declared at-risk zones for the coronavirus as authorities observe a sharp increase in infections.

Jerome Salomon, speaking on France Inter radio, warned “the situation is deteriorating from week to week” in the country. He says virus clusters emerge every day following family reunions, big parties and other gatherings amid summer holidays.

The deals with Novavax, an American biotech company, and Janssen, a Belgian company owned by Johnson & Johnson, mean the U.K. has now acquired the rights to 340 million doses of six different experimental vaccines. The government seeks to hedge its bets on products still in the testing phase to see if they are safe and effective.

Kate Bingham, chair of the government’s Vaccines Taskforce, told ITV there is no guarantee any of the vaccines will work “because there have been no vaccines against any human coronavirus.

“So what we’re doing is we’ve chosen six of the most promising vaccines across four different vaccine types and we’re hoping that one of those will work,’’ she says.