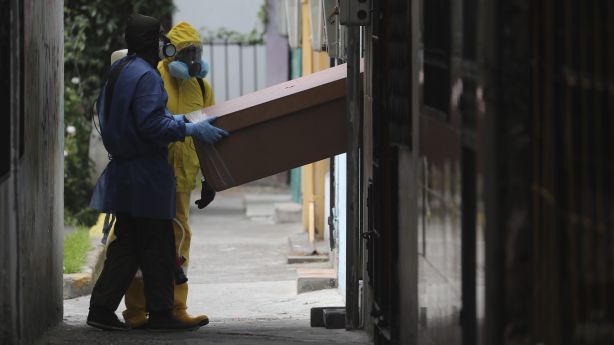 The figures released by the Korea Centers for Disease Control and Prevention Sunday brought the national caseload to 15,318, including 305 deaths.

The number of new cases was the highest since 367 were reported on March 8, when the country was concentrating public health tools and personnel from nationwide to combat an outbreak in the less populated southern region.

The KCDC said 253 of the new cases came from the Seoul metropolitan area, home to 26 million people, where health authorities have been struggling to stem transmissions linked to various places and groups, including churches, nursery homes, schools, restaurants and door-to-door salespeople.

Infections were also reported in other major cities, such as Busan and Daegu, a southeastern city that was the epicenter of the country’s previous virus crisis in late February and March, when hundreds of new cases were reported each day.

— Millions of seniors live in homes with at least one child, and the new school year could bring new worries for them.

— Testing for the coronavirus drops in Texas as schools reopen and the state prepares for football. The drop comes even as deaths are continuing to climb.

— Thousands of British tourists beat a hasty retreat from France to avoid a mandatory 14-day quarantine at home.

KAHULUI, Hawaii — Kahului Airport on Maui has completed its second phase of its thermal screening project meant to combat the spread of the coronavirus. The screening uses thermal imaging and facial recognition technology to pinpoint people with a temperature of 100.4 degrees or higher. Dual lens cameras have been installed at all arrival gates and TSA checkpoints in the airport. The Maui News reports that when phase three is completed, the cameras will be able to track travelers with high body temperatures so contact tracers can stop and screen them before they leave the airport.

KANSAS CITY — Trump’s top coronavirus adviser used a visit to Kansas to urge people to wear masks regardless of where they live.

“What’s really important for every Kansan to understand is that this epidemic that we have been seeing this summer is both urban and rural,” Dr. Deborah Birx, coordinator of the White House coronavirus task force said Saturday. “So we are really asking all communities, whether you are urban or rural communities, to really wear a mask inside, outside, every day.”

She also stressed that people should socially distance and not have gatherings while in Kansas City, Kansas, for a meeting with Kansas Gov. Laura Kelly, as well as community and state health officials at KU Medical Center, The Kansas City Star reports.

“You can’t tell who’s infected,” Birx said. “Much of the spread is asymptomatic. I know we all want to believe that our family members cannot be positive. They are.”

“We have been doing that across the South and we’ve seen a dramatic decrease in cases where the population has followed those guidelines,” she said.

AUSTIN, Texas — The death toll in Texas from the coronavirus inched nearer to 10,000 on Saturday, with 238 deaths bringing the total to 9,840. The Texas Department of State Health Services said the number of reported cases increased by 8,245 to 528,838. Health officials said Saturday that 6,481 people with COVID-19, the disease caused by the virus, were hospitalized. The number of hospitalizations has been decreasing since peaking in July at 10,893, and the number of newly reported cases is shrinking. But the virus is still spreading geographically.

OKLAHOMA CITY — Oklahoma on Saturday reported an additional 901 cases of the coronavirus and 13 more deaths. The Oklahoma State Department of Health says the number of reported cases is now at 47,798. There have been a total of 657 deaths from COVID-19, the illness caused by the virus. The true number of cases in Oklahoma is likely higher because many people have not been tested, and studies suggest people can be infected and not feel sick. The health department said that as of Saturday, there were 7,234 active cases and 39,907 people have recovered.

The latest COVID-19-related hospitalization numbers posted by the state Department of Health Services were at levels last seen in early June.

The COVID-19-related hospitalizations in Arizona peaked about a month ago following Gov. Doug Ducey’s lifting of stay-home orders in May. Ducey re-imposed some restrictions and allowed local governments to impose mask requirements in late June.

NEW YORK — New York’s annual light display honoring victims of 9/11 is back on, officials announced Saturday. They say health officials will supervise this year’s tribute to ensure workers’ safety amid concerns related to the coronavirus pandemic.

Gov. Andrew Cuomo said in a statement that it is especially important this year to commemorate the lives lost and heroism displayed in the Sept. 11 attacks “as New Yorkers are once again called upon to face a common enemy.”

The announcement came days after the National September 11 Memorial & Museum canceled the Tribute in Light over concerns the coronavirus might spread among crews creating twin columns of light to represent the World Trade Center in the Manhattan sky.

Alice Greenwald, president and CEO of the 9/11 Memorial & Museum, thanked former New York City Mayor Mike Bloomberg, Cuomo and the Lower Manhattan Development Corporation “for their assistance in offsetting the increased costs associated with the health and safety considerations around the tribute this year.”

“This year, its message of hope, endurance and resilience are more important than ever,” she said in a statement.

President Cyril Ramaphosa says the country has passed the peak of coronavirus infections and a “ray of light is visible now on the horizon.”

The loosening of the lockdown on Monday will remove nearly all restrictions on economic activity, including the hospitality industry, and allow inter-provincial travel. But international travel restrictions are still in place and gatherings of more than 50 people are still banned.

South Africa has the world’s fifth-largest virus caseload with more than 583,000. The health ministry announced Saturday a total of more than 11,600 confirmed deaths.

Ramaphosa says in the past three weeks, confirmed cases have dropped from more than 12,000 a day to around 5,000. The president acknowledged the hardship of the lockdown and warned South Africans not to be complacent because of asymptomatic spread, when people don’t realize they have the virus.

More than 248,000 people have tested positive for the virus in Turkey since March.

Mask wearing in public is mandatory in much of the country, which has lifted many social restrictions to curb the spread of the virus.

KRCG reports the cases brought the state’s total number of confirmed infections to 51,640 on Saturday. The state also added nine more deaths to bring the confirmed total to 973, according to health officials.

The only other day with more new cases was July 17, with 879. Both days had large numbers of tests processed.

An additional 9,539 tests were reported by public and private labs in the last 24 hours. The positivity rate of tests during that period was 8.7%, lower than the previous 11.7%.

A total of 552,389 tests have been processed since the start of the pandemic.

The Carlsbad Current-Argus reports the Waste Isolation Pilot Plant has had cases among employees and contract workers more than double in the last week. This week, the plant announced four new cases among employees of Nuclear Waste Partnership, the contractor hired to oversee daily operations at the facility.

The plant is in the second phase of resuming normal operations.

The Health Ministry registered 629 coronavirus cases Saturday in the previous 24 hours, increasing the confirmed total to more than 253,000.

The last time the daily number was higher was 669 cases on May 23. Only a few weeks ago, Italy had daily cases numbers in the 200s.

OPELIKA, Ala. — Alabama high schools are limiting attendance at football games this fall because of the coronavirus pandemic.

Opelika High School says it will cap attendance at about 30% of the stadium capacity of 8,000 so fans can maintain proper social distancing. Gulf Shores says attendance at athletic events will be cut by 50%.

Other schools are announcing attendance reductions or still working on plans. Some are skipping fall sports. The first football games are scheduled for this week, although some schools have delayed games after players or staff tested positive for the coronavirus.

ROME — Some 455,000 people in Italy received citations or fines for not obeying early lockdown rules, according to Italian Interior Ministry figures released Saturday.

The government imposed a nationwide lockdown in a bid to slow the coronavirus on March 11. Citizens could go out for essential work or food shopping in a country that became the epicenter of the virus in Europe.

Authorities says they cited 1,117 people for violating quarantine through July 31. The numbers of cases and deaths have dramatically decreased since the peak in Italy.

Curfews remain in place in more than half the country as Algeria tries to contain the virus.

Crowds packed beaches in the capital Algiers, celebrating the opportunity to swim in the Mediterranean amid the August heat. Restaurants reopened, and mosques that can hold more than 1,000 people must ensure social distancing measures.

However, mosques remain closed to all women, children and the elderly.

JOHANNESBURG — A report in South Africa says there is a higher risk of Black or mixed-race patients dying of COVID-19 in the country’s hospitals than white patients.

A report by the National Institute for Communicable Diseases indicates the association but doesn’t go into detail. South Africa has released little data by race during the coronavirus pandemic.

The country has the world’s fifth largest virus caseload with more than 579,000 confirmed cases and ranks No. 13 with more than 11,000 deaths, according to the tally by Johns Hopkins University.

The report includes data from more than 150 public and private hospitals across the country. According to the 2011 census, 86% of South Africans are Black or mixed race, with 9% white.

BERLIN — Germany’s health minister has defended the decision to declare all of mainland Spain and the Balearic Islands “risk areas” for coronavirus infection.

Travelers must undergo compulsory testing and two-week quarantine after arriving from there.

Health Minister Jens Spahn told Bild on Saturday that he knows “how much Germans love Spain as a vacation destination. But the numbers there are rising quickly, too quickly.”

The travel classification also includes the Spanish island of Mallorca, a popular destination for German tourists.

Germany is providing free testing for coronavirus at airports and those who test negative can avoid quarantining for the full 14 days.

Copyright © 2020 The Associated Press. All rights reserved. This material may not be published, broadcast, rewritten or redistributed.