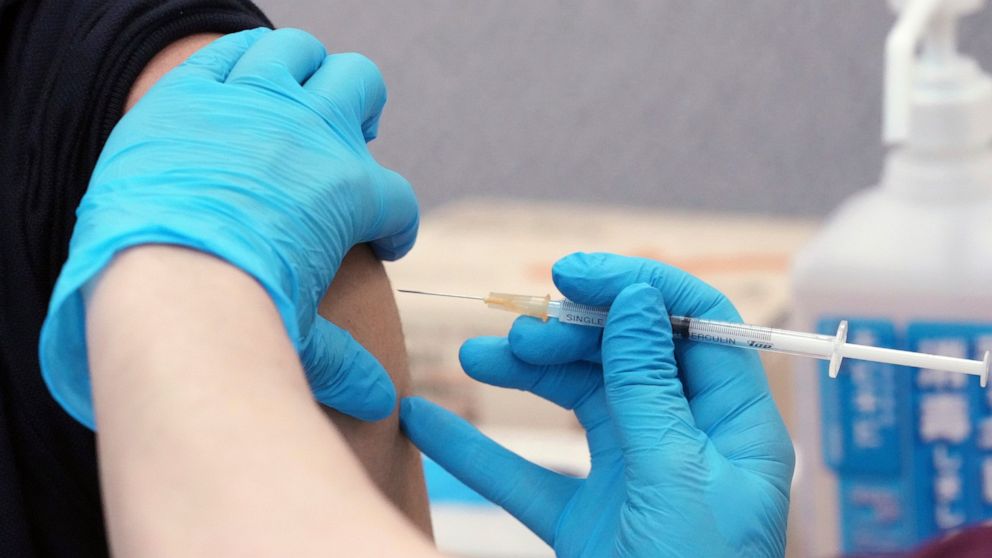 ANKARA, Turkey — Turkish President Recep Tayyip Erdogan has announced a further easing of coronavirus restrictions, as the number of infections continue to decline and the country’s vaccination program gains momentum.

Speaking after a Cabinet meeting on Monday, Erdogan said that as of July 1, lockdowns imposed on Sundays and nighttime curfews would be lifted, while public and private sector workers would return to their normal working hours.

Restrictions on public transport and intercity travel would also be lifted, Erdogan said.

The 7-day average of daily infections is around 5,645 — a significant drop from the record high 63,000 infections in mid-April. The country has meanwhile administered nearly 43 million vaccine doses. More than 28.2 million people received their first dose and 14.5 million people have received both doses.

MORE ON THE PANDEMIC:

— Past and present collide for California’s COVID-19 nurses

BERLIN — Italian Premier Mario Draghi has said he backs the idea of moving the final of the Euro 2020 soccer tournament out of Britain because of the spread of a highly contagious variant of the coronavirus there.

Asked by a reporter Monday in Berlin whether he advocates moving the final to Rome given the spread of the delta variant in Britain, Draghi said: “Yes.”

“I advocate that the final should not take place in a country in which the risk of infection is very big,” he said.

He spoke ahead of a meeting with German Chancellor Angela Merkel, who also expressed concern about the rise in cases of the delta variant in Britain.

Merkel said further improving coordination on the pandemic within the European Union would be discussed at a summit of EU leaders later this week.

“Particularly when it comes to the travel rules European Union member states have with regard to Great Britain there is still a big range of approaches,” she said. “I think we need to discuss this much more.”

JERUSALEM — Israeli health officials are calling for vaccination of teenagers aged 12-15 as concerns grow of localized outbreaks of the coronavirus in the largely vaccinated country.

Nearly 90 people were confirmed sick with COVID-19 in Israel on Monday, the highest single day total since the end of April, as health officials reported outbreaks in several schools. The Health Ministry issued a statement calling for a widening of the vaccination campaign among teenagers in light of the new infections.

Israel has lifted virtually all coronavirus restrictions and regulations following a mass vaccination campaign that started in December. Over 55% of the country’s 9.3 million citizens have received two doses of the Pfizer/BioNTech vaccine.

Nearly a third of the new cases in the country in the past week have been vaccinated individuals, and many of the new infections are with the Delta variant.

Health Ministry Director-General Hezi Levi told Israel’s Channel 12 on Monday that most of the new cases among vaccinated persons are mild, but called on parents to vaccinate their teenage children.

GENEVA — The head of the World Health Organization said it is in discussions with numerous companies and institutions to create a technology transfer hub for coronavirus vaccines in South Africa.

At a press briefing on Monday, Tedros Adhanom Ghebreyesus said the consortium involves a company called Afrigen Biologics and Vaccines, which will act as a hub both for making vaccines that use a genetic code of the spike protein, known as mRNA vaccines, and by providing training to other manufacturers to make these shots, including the company, Biovac Institute.

“WHO is facilitating this effort by establishing the criteria for technology transfer,” Tedros said. “We are now in discussions with several companies that have indicated interest in providing their mRNA technology.”

The German company BioNTech, which has partnered with Pfizer to makes its COVID-19 vaccine, recently announced it would scale up efforts to establish mRNA vaccine facilities across Africa.

South African President Cyril Ramaphosa said the new WHO effort would “change the narrative” for Africa and help enhance the continent’s ability to “take responsibility for the health of our people, for the health of Africans.”

Ramaphosa said many people in developing countries were “still struggling for access to vaccines that are made in their billions in the north.” He said it was “just not equitable and not fair” that some people were denied access to COVID-19 doses because of where they live.

WASHINGTON — President Joe Biden is expected to fall short of his commitment to shipping 80 million COVID-19 vaccine doses abroad by the end of June because of regulatory and other hurdles, officials said as they announced new plans Monday for sharing the shots globally.

Officials said that while the U.S.-produced doses are ready, deliveries have been delayed due to U.S. and the recipient countries’ legal, logistical and regulatory requirements.

“What we’ve found to be the biggest challenge is not actually the supply — we have plenty of doses to share with the world — but this is a Herculean logistical challenge,” said White House press secretary Jen Psaki.

Psaki said shipments will go out as soon as countries are ready to receive the doses and the administration sorts out logistical complexities, including vaccination supplies like syringes and alcohol prep pads, cold-storage for the doses, customs procedures and even language barriers. Psaki said she was not aware of how many doses would be shipped by the end of the month.

The excess doses are not needed in the U.S., where demand for vaccinations has plummeted in recent weeks as more than 177 million Americans have received at least one shot.

GENEVA — A senior World Health Organization expert said the agency would be following up with Olympic and Japanese authorities about their decision on Monday to allow domestic fans to attend the Summer Games.

At a press briefing on Monday, WHO’s emergencies chief Dr. Michael Ryan noted that Japan’s recent COVID-19 rates were lower than those seen in many other countries, including Britain, the U.S., France and the Netherlands.

“What we are glad of is that the rates of disease have fallen persistently and consistently in Japan over the last number of weeks,” Ryan said. “It is important that we really look at the background rate and underlying epidemiology of disease.”

Ryan said WHO had planned meetings this week with partners including the International Olympic Committee and the Japanese government to discuss measures including physical distancing, diagnosis and screening, ventilation, surveillance, etc. He said the decision to allow domestic spectators at the Olympics was still provisional and could be subject to change.

TORONTO — Fully vaccinated Canadian citizens who test negative for COVID-19 will be exempt from two weeks of quarantine when returning to the country as of July 5, officials said Monday.

Canadians and permanent residents who return to Canada will have to be fully vaccinated 14 days or more prior to arrival. Officials said those travelers must have two doses of a vaccine approved by Canada, provide a negative COVID-19 test from 72 hours before arrival, take a second test upon arrival, and have a quarantine plan in the event the arrival test comes back positive.

Public Safety Minister Bill Blair said the first phase of easing border measures will continue to restrict entry to Canada for foreign nationals who want to enter for nonessential reasons.

The government said fully vaccinated Canadian travelers who want to be considered for the exemption from quarantine and reduced testing requirements will be required to provide evidence of their vaccination status by uploading supporting documentation into what’s called the ArriveCAN app or by signing in online at a government website.

HONG KONG — Hong Kong authorities said quarantine requirements will soon be relaxed for travelers who are fully vaccinated against COVID-19 and arrive from certain lower-risk countries.

Hong Kong leader Carrie Lam on Monday said the relaxation of quarantine measures will first be open to Hong Kong residents returning to the city. They must have been fully vaccinated for at least 14 days, must undergo a serology test to prove they have the antibodies and must test negative for the coronavirus upon arrival in Hong Kong.

The announcement comes amid a shortage of quarantine hotel rooms in the city. Current quarantine restrictions can require arrivals from various countries to serve between seven to 21 days of quarantine at designated hotels, and many of the city’s hotels are booked through August.

Officials said the arrangement could begin on June 30, and that it is looking to open a similar arrangement for non-residents later.

LONDON — Dozens of people have ignored advice not to travel to Stonehenge for the annual summer solstice celebrations, which were cancelled Monday due to coronavirus concerns.

English Heritage, which looks after the Neolithic monument, had planned a live feed of the sunrise at Stonehenge for the second year in a row. But the organization said that program had to be interrupted because of safety concerns after “a number of people have chosen to disregard our request to not travel to the stones this morning.”

Thousands of people who tuned in to watch the sunrise at the stones online ended up watching pre-recorded footage before the live feed returned around 5 a.m.

Video from Britain’s PA news agency and elsewhere showed dozens of people gathering inside the stone circle, with some scaling a low fence to climb inside the restricted area to reach the stones. Some were seen dancing and others held a banner that read “Standing for Stonehenge.”

English Heritage said it was “disappointing” to see people “act in a way that put themselves, our staff and the police at risk” during a pandemic.

The summer solstice typically draws tens of thousands of people to the stone circle in southern England to celebrate the longest day of the year.

The Health Ministry said it had confirmed another 14,536 new infections and 294 deaths. Along with the more than 2 million infections, Indonesia has reported more than 54,950 deaths, both the most in Southeast Asia.

Indonesia, the world’s fourth most populous country, has seen infections surge in recent weeks, a climb that has been blamed on travel during last month’s Eid al-Fitr holiday as well as the arrival of new virus variants, such as the the Delta version first found in India.

The surge is putting pressure on hospitals like those in Jakarta — where 80% of hospital beds are full — and has added urgency to the government’s plans to be inoculating 1 million people each day by next month. Authorities have so far only fully vaccinated 12.3 million of Indonesia’s 270 million people and partially vaccinated another 10.9 million others.

TOKYO — The Tokyo Olympics will allow some local fans to attend when the games open in just over a month.

Organizers on Monday set a limit of 50% of capacity up to a maximum of 10,000 fans for all Olympic venues.

The Tokyo Games are set to open on July 23.

Fans from abroad were banned several months ago. Officials say local fans will be under strict rules. They will not be allowed to cheer, must wear masks, and are being told to go straight home afterward.