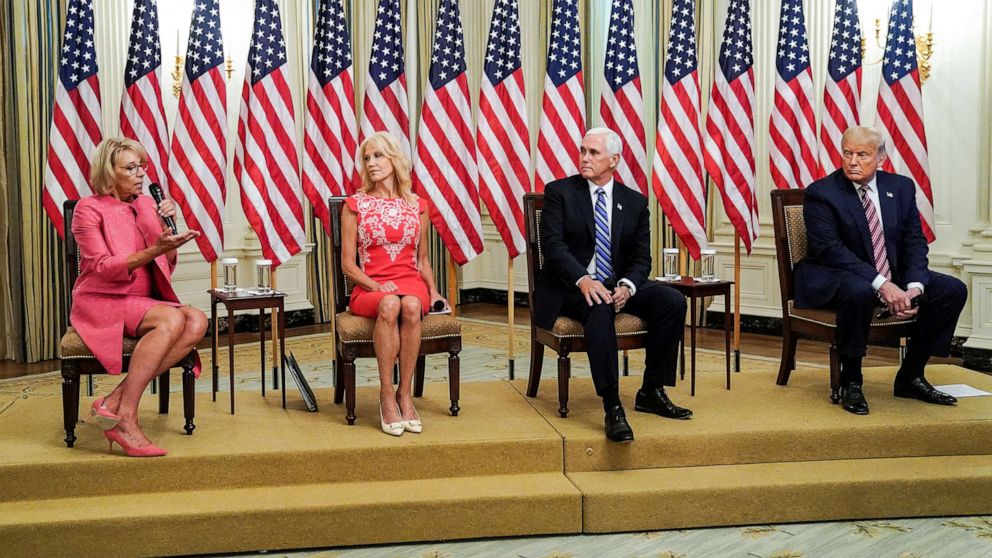 The U.S. attempt to return children to the classroom this fall has turned into a slow-motion train wreck, with at least 2,400 students and staff either infected with COVID-19 or self-isolating because of exposure, and the vast majority of large school districts opting to go online this summer amid rising cases of the virus.

President Donald Trump and Education Secretary Betsy DeVos have mostly waved off the situation unraveling this week in states like Georgia, Alabama, Indiana and Tennessee, where schools opened their doors after a months-long hiatus due to the pandemic — only to quickly backtrack as soon as infections popped back up.

Trump and DeVos have demanded that schools stay open full-time and threatened to pull federal funding if the institutions fail to do so. At a White House event this week, DeVos made no mention of the crisis in Georgia and elsewhere and said families shouldn’t be held “captive to other people’s fears or agendas.”

DeVos has “consistently said the decision to reopen should be made at the local level, and some schools may need to temporarily remain virtual based on local public health situation,” Angela Morabito, a spokesperson for the Education Department, told ABC News late Thursday in an emailed response to questions about the recent school closures.

“She’s also, for the last 30 years maintained that parents and families need options when it comes to the child’s education and that has never been more evident than now,” Morabito wrote. “Parents need to have access to safe, in-person options as well as distant or remote learning options if that is what is best for their family. The key word here is safe.”

But what is “safe” is not at all clear to most school officials and at the heart of a bitter debate unfolding just months ahead of the presidential election.

There is universal agreement that in-person instruction is superior to online classes and particularly vital for at-risk students. But local officials warn of complicating factors: Crowded hallways, opposition to masks, dilapidated buildings with windows sealed shut and reluctant staff.

“There was no way for us to socially distance our children and follow other guidelines” with in-person instruction five days a week, said Helena Miller, chair of the Rock Hill school board in the red state of South Carolina.

Schools in neighboring states this week seemed to make the same point as they struggled to stay open within days or weeks of reopening — many students without masks and walking in crowded hallways. Georgia’s Cherokee County — which was hit the hardest — reported that nearly 1,200 students and staff were self-isolating after known exposures.

There were other schools too. A community college in Mississippi told 300 of its students to quarantine after nine positive cases were confirmed, along with students in Gulfport and Corinth districts. Indiana schools were also hit with an estimated 500 students in quarantine across several districts, as administrators expressed concern that there would not be enough staff available to continue instruction.

“Unfortunately, we are in a situation where parents seem to be sending their child/children to school even when they are symptomatic or possibly even when they, as parents, have been tested and are awaiting the results, later to find out they are positive,” wrote Reece Mann, the superintendent of Delaware Community School Corporation in Muncie, Indiana, in an email to parents, according to The Associated Press.

There’s no federal standard on when it’s considered safe to reopen schools, although the White House and the Centers of Disease Control and Prevent have released various documents suggesting “phased” reopenings and advising that kids and staff wear masks and keep students six feet apart.

As a result, most schools have become hyper-focused on their own local virus data, with some looking to the World Health Organization’s recommendation that fewer than 5% of an area’s daily tests must turn out positive for 14 days before schools in the area can reopen. Currently, only 16 states meet that criteria.

“We pay absolutely no attention to what the White House has to say on this and neither do most big city school districts,” said Michael Casserly, the executive director of the Council of Great City Schools, a coalition of the nation’s largest urban public school systems.

Dr. Anthony Fauci, the nation’s top infectious disease expert, suggested communities look at the number of new COVID-19 cases in a given week for every 100,000 people. If the rise in new cases is higher than 10%, it should be cause for serious concern.

If “you’re in a red zone, I think you really better be careful,” he said Thursday in a livestreamed discussion sponsored by Walter Reed National Military Medical Center.

Miller, in South Carolina, said her board anguished for months before finally deciding on offering parents a “hybrid” option, starting Sept. 8. The option allows parents to choose in-person instruction for their kids two days a week — a move that cuts down the number of kids in a school at one time to allow for social distancing.

The hybrid model has been sharply criticized by DeVos when it was initially adopted earlier this summer by a Virginia school district. At the same time, DeVos has argued that a national plan for schools isn’t needed because schools are run by local officials.

Many parents agree with DeVos and want to at least try to move ahead with in-person classes as much as possible.

“I definitely still say, ‘Give this a shot.’ I think there is a way to do this in person,” Carlo Wheaton, the parent of a junior at Woodstock High School in Georgia, told WSB-TV in Atlanta after the school announced it had to close temporarily after 14 people tested positive for the virus and 15 more were waiting for their test results.

Dan Domenech, executive director of AASA, the School Superintendents Association, said one solution is money. His group estimates that schools need $490 per student — an estimated $200 billion nationwide for the 54 million students attending school in the U.S. — to allow for schools to reopen safely.

The money could be used to improve ventilation and expand classrooms to allow instructors to teach their students while socially distanced.

Trump announced Wednesday that he plans to provide 125 million masks for students. Domenech said he’d take it but it’s a drop in the bucket for schools.

“We see what’s happening in Washington: nothing,” Domench said.

Miller said at her local school board presidential politics and White House events aren’t part of the equation, and that she’s leaning on her local health department and governor’s office to figure out what to do when there is no playbook.

“There are no right answers,” she said.