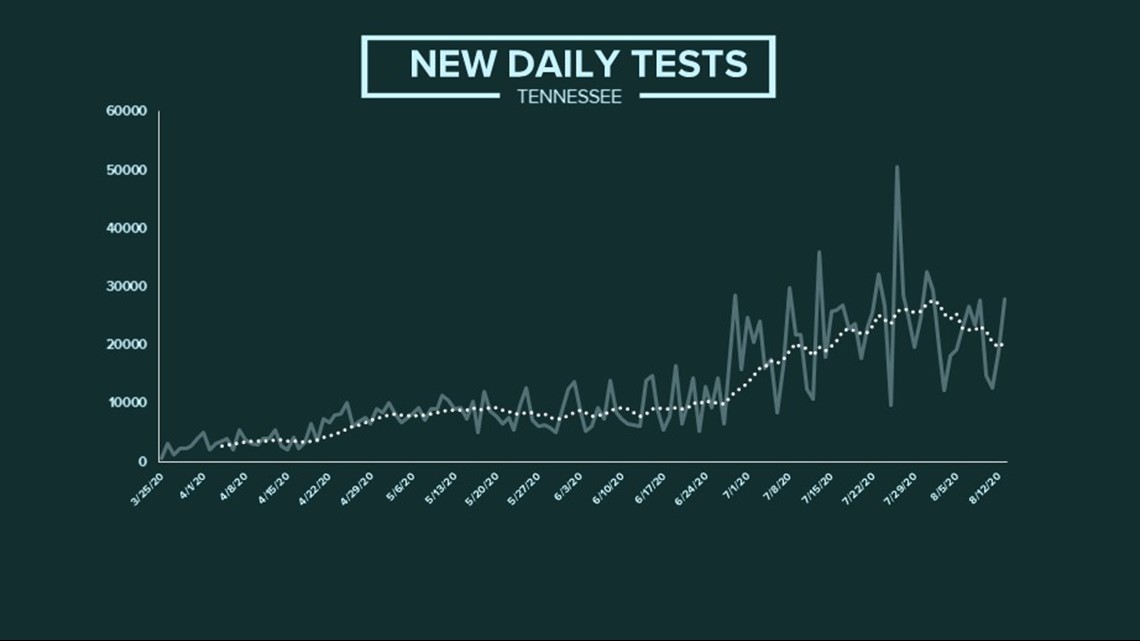 In the last week, the department of health has reported about 21,000 tests per day. That’s down about 15 – 30 percent from late July.

KNOX COUNTY, Tenn. — In most of East Tennessee, recent COVID-19 trends have shown promise. Knox, Hamblen and Sevier Counties are reporting fewer new cases each day. However, they are also reporting fewer tests.

“Our testing numbers are down a bit,” Dr. Piercey said. “Last week our average was about 20,000 tests per day, and in the two-to-three weeks before that, it was in the mid-to-upper 20s.”

The Knox County Health Department said it has seen a decline in testing locally, but wasn’t sure why.

“It has not been a huge amount, but there was a little bit of a trend down the past couple of weeks,” said Charity Menefee, director of environmental and communicable disease for KCHD. “There’s a lot of things that can factor in.”

Dr. Piercey, however, has a few theories.

“First of all, fortunately, we believe there are less sick people,” she said on Thursday during a media briefing. “When we look at our COVID-like illness syndromic surveillance curve, we have seen a sustained decline in those symptoms.”

But the proportion of people testing positive has stayed relatively constant at around 10 percent.

According to the World Health Organization and Johns Hopkins University, that means that there are not enough Tennesseans being tested.

“One of the big concerns that I have as it relates to testing numbers is that people may actually be avoiding getting a test because they’ve heard about the long turnaround times,” Dr. Piercey said. “Our statewide average is now down to two and a half days.”

She said it may take longer for people to be notified or traced, but that laboratories are processing results much quicker than they were in mid-July.

“We also know that given some of the lab capacity and turnaround issues that some providers and some labs are prioritizing specimens based on those who are asymptomatic,” she said. “That is starting to ease up some, but that may reduce the number of people tested.”