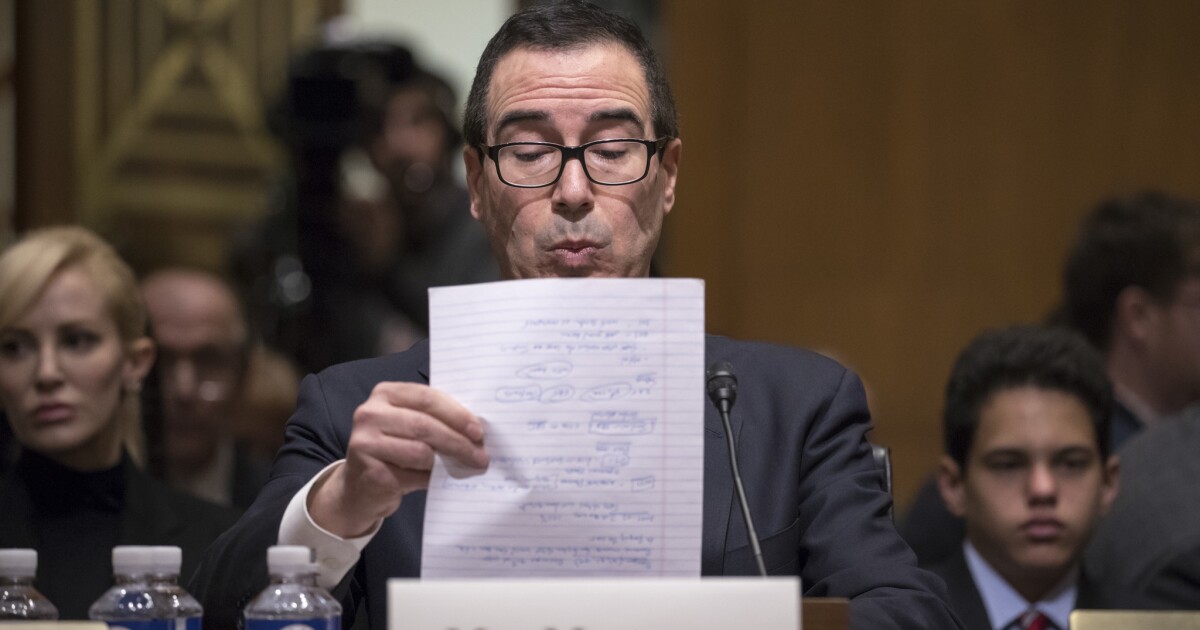 Never let it be said that President Trump doesn’t know how to take advantage of a crisis. For our latest example, let’s look at how he has exploited the distractions caused by the COVID-19 pandemic to quietly launch yet another attack on the Affordable Care Act.

This attack involves promoting “healthcare sharing ministries,” which are typically associated with religious faiths, to siphon enrollment from legitimate health insurance plans, thus weakening the latter in a way that is likely to drive up their costs.

A new regulation proposed by the Treasury Department would define healthcare sharing ministries as health insurance and for the first time allow some members to take a tax deduction for their monthly contributions.

Incentivizing payments to HSMs will only accelerate medical debt and poor health outcomes during an international health crisis.

That could encourage more people to sign up for what many healthcare experts consider substandard coverage.

The Trump administration’s redefinition of sharing ministries as insurance contradicts the ministries’ own self-description. They typically warn enrollees that they’re not health insurance companies and don’t guarantee that they’ll pay any enrollee claims, even for ostensibly covered services.

Those formal disclaimers have enabled the ministries to avoid regulation by state insurance agencies. The plans are “largely unregulated,” in the words of the Commonwealth Fund.

Thirty states exempt healthcare sharing ministries from insurance laws as long as they issue a written disclaimer that they’re not insurance, and Congress granted them an exemption from Affordable Care Act rules.

The sharing ministries, however, are often marketed in ways that could confuse customers into believing they’re buying real health insurance.

The Treasury Department slipped its proposed rule into the regulatory hopper on June 10, giving critics until Aug. 10 to file comments.

California Atty. Gen. Xavier Becerra and the attorneys general of 19 other states have weighed in. In their official comment, they say that “incentivizing payments to HSMs will only accelerate medical debt and poor health outcomes during an international health crisis” and give sharing plans greater incentive “to ramp up fraudulent marketing practices.”

They maintain that the change is illegal because it was proposed without any analysis of the potential to cause consumer confusion or to erode existing health insurance markets.

In other words, they say Trump is offering a trifecta of dumb and dishonest healthcare policy.

The Treasury’s proposed rule reflects the Trump administration’s policy of promoting low-quality health plans that are generally noncompliant with the Affordable Care Act such as short-term health plans, that lack the ACA’s consumer safeguards. These plans can appear to be cheaper than compliant plans because they offer poorer benefits.

In an October 2017 executive order cited in the Treasury’s rule proposal, Trump called for expanding access to noncompliant plans to give Americans “meaningful choice” in healthcare. In a follow-up order in June 2019, Trump directed the Treasury to craft regulations allowing healthcare sharing ministry expenses to be tax-deductible.

The concept of sharing healthcare costs originated with Amish and Mennonite communities more than 100 years ago, but spread to other religious groups in the 1980s. The monthly contributions can be applied to the needs of specific members, but typically they’re placed in a pool from which members’ bills are paid according to the ministries’ coverage terms.

Customers who signed up with sharing plans aimed at members who shared “a common set of ethical or religious beliefs” were also exempted from the ACA’s penalty for not carrying insurance. (Congress reduced that penalty to zero as of this year as part of the 2017 tax-cut bill.)

Those exemptions allow healthcare sharing ministries to offer their members junk. The plans typically place benefit limits on member claims. The ACA doesn’t allow legitimate health plans to do so.

The sharing plans can exclude coverage of preexisting conditions. They usually don’t cover prescription drugs or preventive services such as immunizations and mammograms.

According to a 2018 report for the National Assn. of Insurance Commissioners, they often refuse to cover any claim putatively resulting from immoral activities such as drug use or — in the words of Christian Healthcare Ministries, one of the largest sharing plans — “adultery, fornication, homosexual behavior [and] bisexual conduct.”

Members of sharing ministries are sometimes instructed to attempt on their own to negotiate with their healthcare providers for discounts, a task that traditional insurers generally perform for their enrollees.

The members are instructed to pay providers up front, then submit bills to the ministries for reimbursement if they exceed a given threshold — anywhere from $500 to several thousand dollars per “incident,” defined as a single injury or brief period of coverage for a chronic condition.

Consumers may find the ministries attractive because their monthly fees can appear modest compared to premiums charged by conventional insurance plans. That can be misleading, since the ministry contributions aren’t eligible for Affordable Care Act subsidies and the plans don’t offer the same consumer protections or minimum services required of ACA plans.

The plans also attract customers by appealing to their spiritual impulses. Christian Healthcare Ministries describes itself as “a healthcare cost solution that’s biblical,” citing the command Jesus issued to his disciples at the Last Supper to “love one another.”

Some ministries have adopted features that mimic those of traditional insurance in ways that could confuse consumers. Monthly contributions resemble insurance premiums, and the threshold exclusions look like deductibles.

Shared healthcare ministries have been thorns in the side of state consumer regulators, who have been fielding complaints from members whose claims have been denied even though they thought they were covered.

The ministries “often employ deceptive marketing tactics,” the attorneys general assert. Members have filed complaints or lawsuits asserting that they’ve been left holding the bag for six-figure medical bills they assumed would be covered.

That could lead to “long-term economic deprivation, bankruptcy, housing instability, and even homelessness,” the attorneys general say. “The confusion HSMs cause by mimicking traditional health insurance is not without a human toll.”

In its defense, Aliera has invoked a dodge common in the healthcare sharing ministry world — that its products aren’t insurance and therefore can’t be regulated by insurance authorities. Aliera “is neither an insurance company nor a Health Care Sharing Ministry, the firm told me by email. Through “multiple wholly owned subsidiaries,” however, “we do provide services to HCSM clients.”

In a response earlier this month to a lawsuit filed by several customers in federal court, however, Aliera said that its affiliates never “assumed any contractual obligation (and took no responsibility) to pay for any member’s medical expenses from their own funds. … Nor is there any guarantee that any specific member’s requests for sharing will be paid out of other members’ health sharing contributions.”

The affiliates “act merely as clearinghouses for their members to share each other’s medical expenses,” the company said.

Texas alleged last year that although Aliera claimed to administer a “health care sharing ministry,” the company is actually “a multimillion dollar for-profit business that admittedly siphons off over 70% of every dollar collected from its members to ‘administrative costs.’” The action is pending, with a trial tentatively set for next year.

The company denied allegations by Connecticut authorities that it was illegally selling insurance by asserting that its products were not insurance. The state allowed Aliera to continue serving existing customers but barred it from soliciting new business. In February, Maryland authorities moved to revoke Aliera’s insurance license; Aliera told me it is “strongly contesting” Maryland’s allegations. Aliera has also agreed to cease marketing healthcare sharing ministries in Colorado.

Put this all together, and it becomes clear that the Trump administration has merely concocted another tactic to erode the Affordable Care Act and saddle Americans with more healthcare risk. The proposed rule would define as insurance the health plans that they themselves admit are not insurance. It will entice more Americans into wasting their money on coverage that won’t give them protection when they need it.

It’s not “free choice,” as the rule proposal says, but like every one of Trump’s supposed healthcare reforms, it’s a poisoned chalice. It will leave many Americans sicker and poorer, in the teeth of the worst public health crisis in our lifetimes.