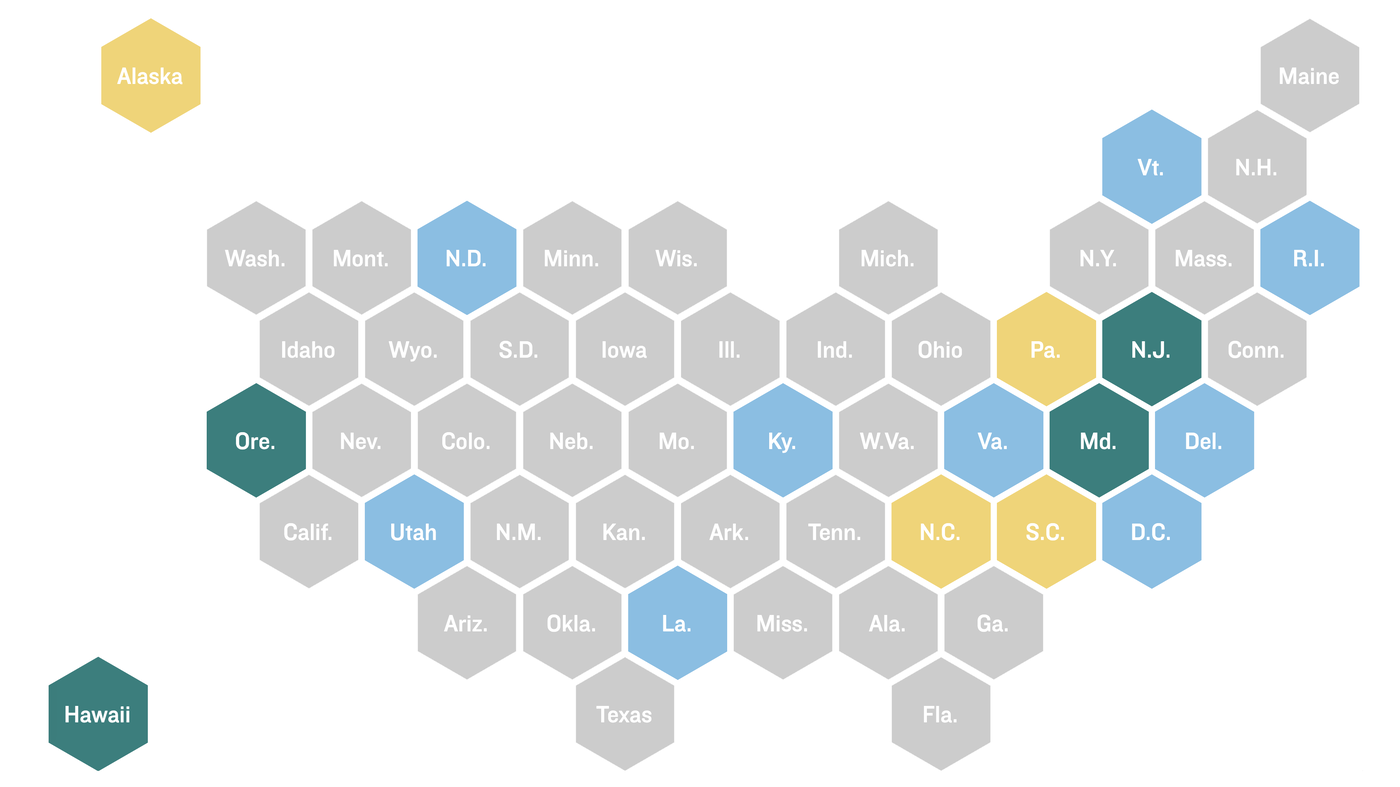 When everyone who tests positive for coronavirus in your community gets a call from a public health worker asking them about their contacts, and those contacts are then asked to quarantine, that can be a powerful way to keep the virus from spreading.

But contact tracing can do more than that: At scale, the data gathered in those calls also offers vital information about where transmission is happening in a community. That data can drive policy, and even guide individuals in assessing what’s more or less safe to go out and do in their communities.

NPR has surveyed the health departments of all U.S. states and territories three times to ask about contact tracing capacity — first in April, then again in mid-June, and most recently in late July. The latest survey, done in collaboration with the Johns Hopkins Center for Health Security, also asked states about contact tracing data: what they were gathering and what they’re making public.

The data states are gathering includes how many contacts are reached and how quickly and where people were exposed — whether it was out in public or at home. The few states analyzing and sharing this data represent “a good start,” says Crystal Watson, senior scholar at the Center for Health Security who collaborated with NPR on the survey. “It’s a little bit scattershot right now.”

She acknowledges that states are limited by a lack of resources. “Health departments are really stretched to the limit right now, and it’s not a trivial thing to put together the data infrastructure to report [this data] publicly,” Watson says. Some federal guidance on “what states should be aiming to report publicly” could be really helpful, she says.

In the meantime, here are six places already making some of the data gleaned from their contact tracing efforts public, which illustrate how useful this information can be.

1. New Jersey: Nearly Half Of Cases Refuse To Provide Names Of Contacts

“The data I’m seeing here on the number of contact tracers and the effectiveness of contact tracing is really fabulous,” says Watson. “It really helps you understand how many people — contacts in particular — are being reached and notified and the timing in which that is happening.” 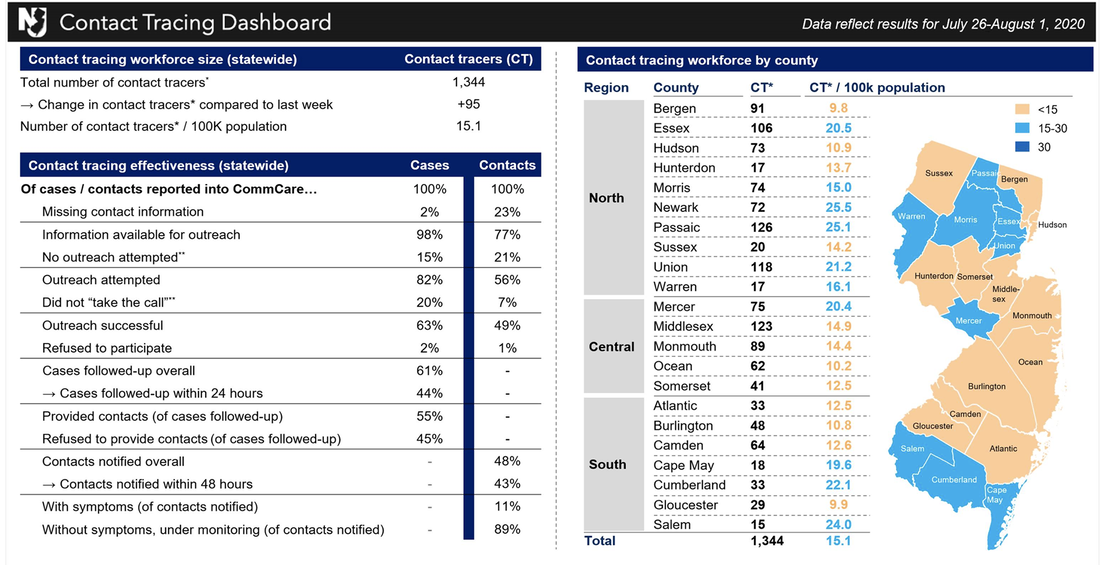 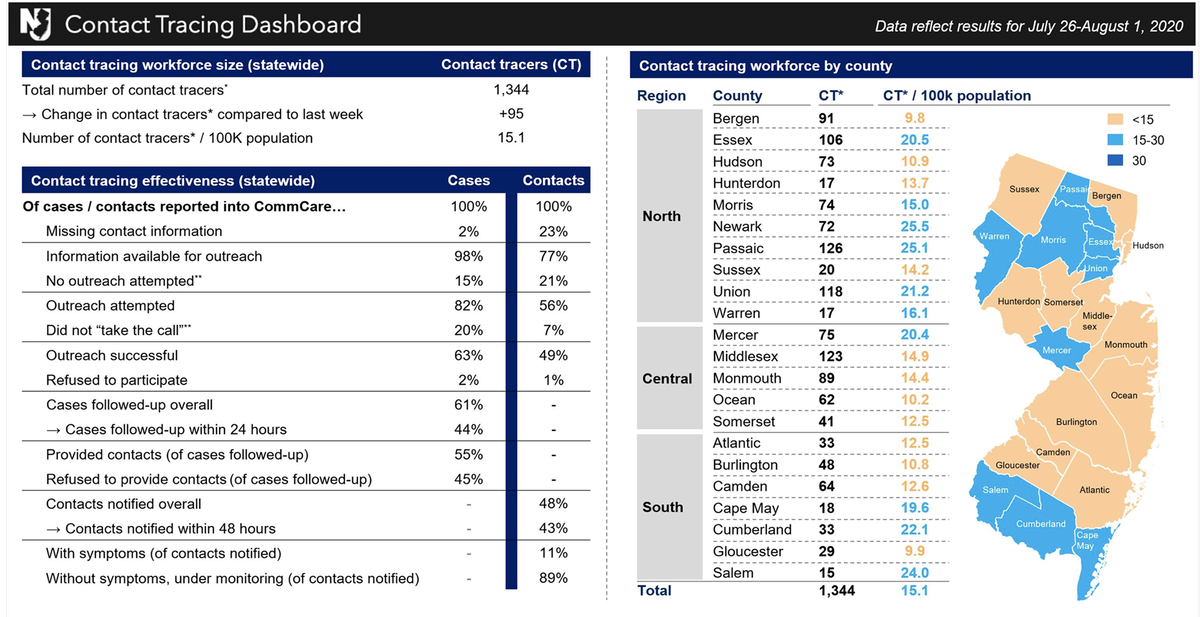 The speed and completeness of contact tracing is key to its effectiveness. If 100% of new cases were reached within 24 hours of diagnosis, and 100% gave a complete list of close contacts, that could curb transmission dramatically.

“I know they’re probably aiming for higher than what they’re getting right now,” Watson says. “Although we’ve also seen some modeling that suggests that even at those levels, contact tracing may provide a big benefit in controlling transmission.”

2. Louisiana: Bars, Day Cares and Casinos — Details On Where Transmission Is Happening

Louisiana doesn’t show a lot of raw data or graphs, but it does have a very helpful list of the settings where outbreaks are happening and how many cases are arising from those outbreaks.

“The data that Louisiana is providing on the COVID-19 outbreaks is unique because it breaks the data down pretty granular-ly about the [likely] location of transmission or exposure,” says Watson. 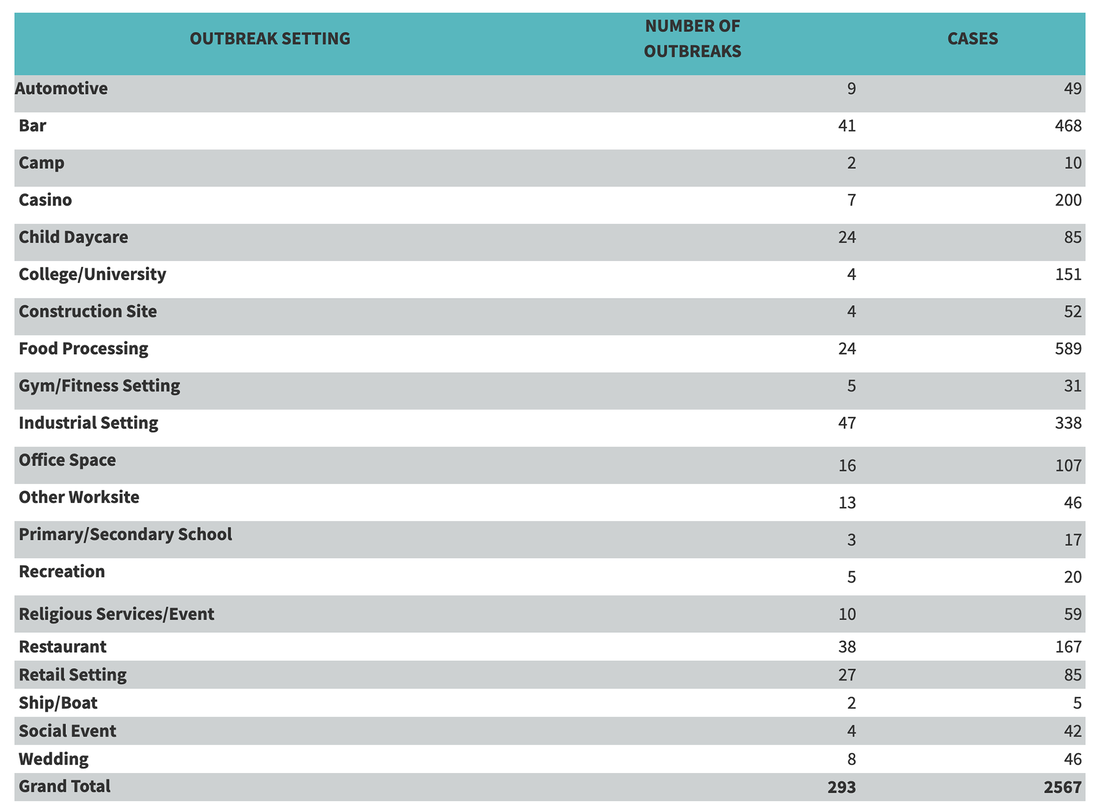 Louisiana’s contact tracing website includes a list of outbreak events that is updated weekly. The site defines an outbreak as “2 or more cases among unrelated individuals that have visited a site within a 14-day time period.” 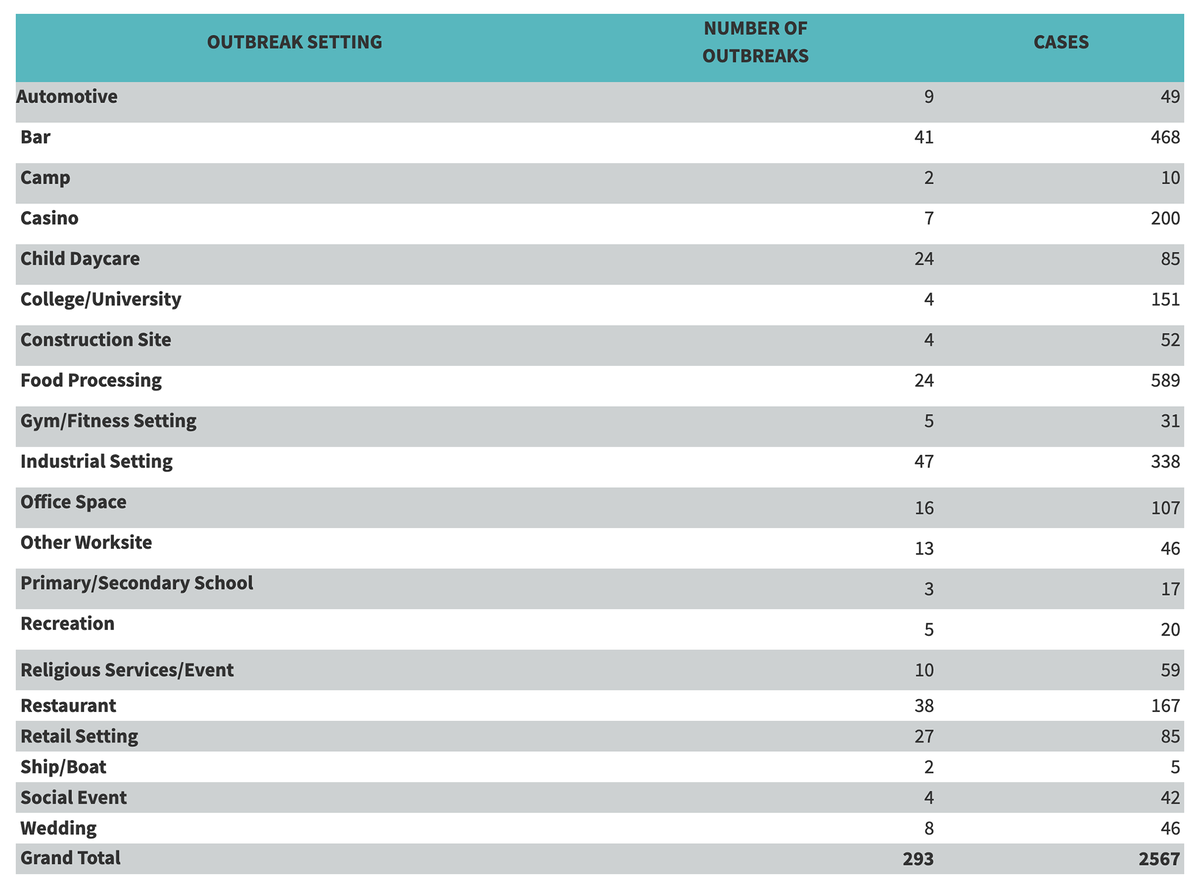 Louisiana’s contact tracing website includes a list of outbreak events that is updated weekly. The site defines an outbreak as “2 or more cases among unrelated individuals that have visited a site within a 14-day time period.”

This level of detail can be really valuable for policy makers who are trying to decide on targeted restrictions on gatherings or business, without shutting everything down. While some other states put out information about transmission from “community spread” or “social settings,” Louisiana is being much more precise about locations.

It’s useful, Watson says, to be able to see that in Louisiana, “gyms, for example, haven’t contributed [to outbreaks] nearly as much as bars.” Beyond driving policy, that kind of information can also help individuals decide where they want to go and how to keep themselves safe.

3. Maryland: Know When To Surge Staff

Maryland has a very detailed view of how contact tracing is going in the state. “This shows how many cases and contacts are being entered in the system, how many cases and contacts are successfully reached and completed their interview,” says Watson. “This helps us get a better idea of both the volume that Maryland is having to trace and the effective reach of the contact tracing programs.” 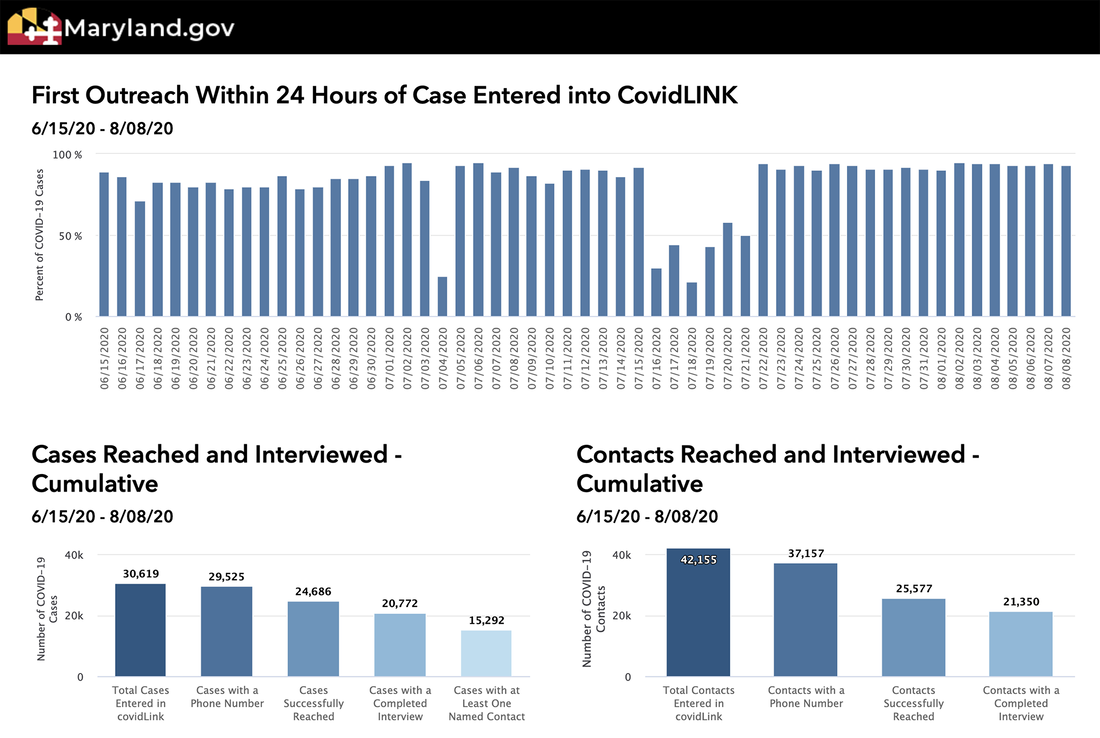 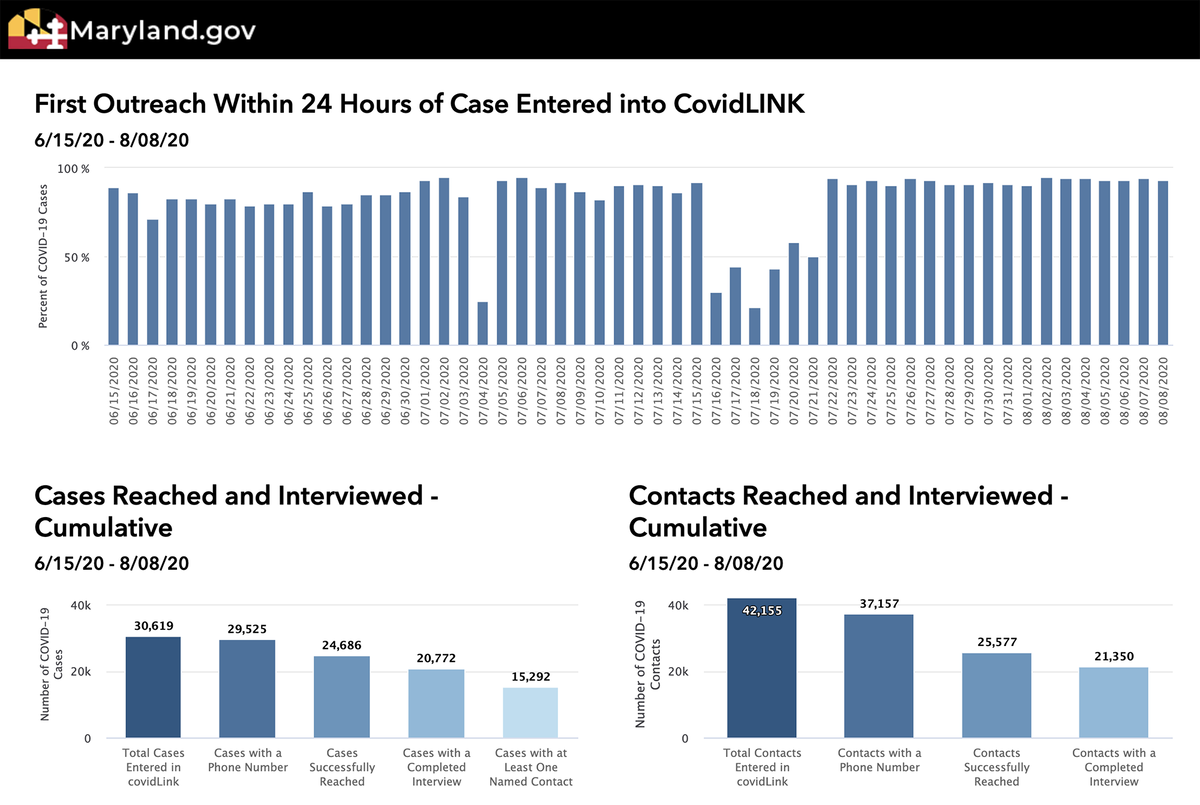 The data show that the Maryland contact tracing workforce has been able to call around 90% of new cases within 24 hours, except for about a week in mid-July. Katherine Feldman, who leads contact tracing at the Maryland Department of Health, told DCist this week that “a few weeks ago … when case counts did rise, we identified a need to surge [contact tracing staff], and we did.”

The data also shows that — as in New Jersey — only about half of cases are providing information about their contacts.

To address the widely reported public health trust problem that may contribute to these numbers, Maryland also has photos and testimonials from people who were traced. Todd Poorman writes: “I am grateful for the contact tracer from the health department who called me to check in, every single day I was in quarantine. […] There is a lot of stigma out there, but the fear holds us back. We need to move past the fear and work together.”

D.C. was one of the first jurisdictions to share this type of data, Watson says. The District’s COVID dashboard currently shows two types of contact tracing data: How many contacts are reached out to within 48 hours, and what percent of new cases arise from people who are in quarantine.

If most new cases arise from people who are already a known contact, that can give assurance that the public health system is staying on top of transmission. In D.C., the data show that only 4.5% of cases arise this way — far from the goal of 60%. 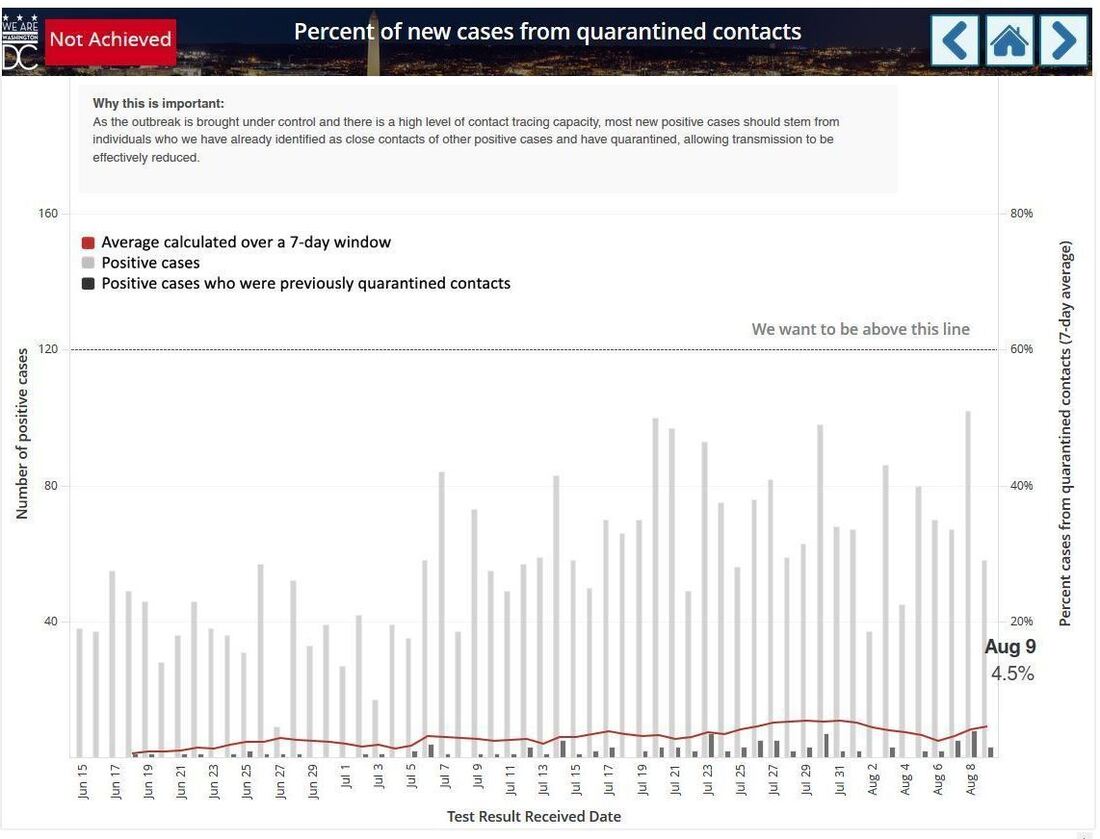 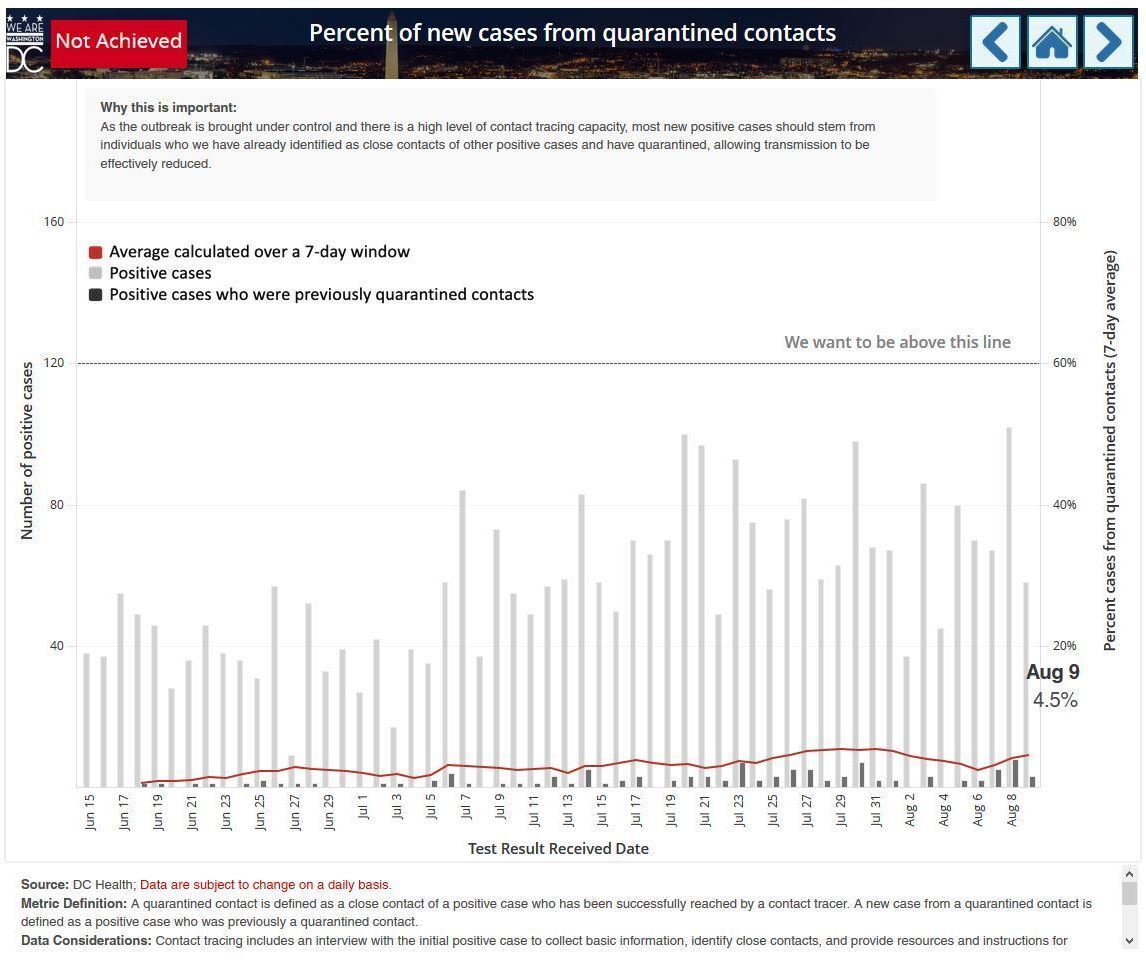 Put another way, 95.5% of new cases were previously unknown to the health department.

“It really does show how much community transmission we still have,” Watson says. “It’s really helpful to know that both we probably need to bring transmission down, generally, and [we need to] continue to improve contact tracing efficacy.”

5. Delaware: Tracking Down Phone Numbers Is A Challenge

Delaware offers a kind of narrative walk-through of the contact tracing process, from a new case being identified, all the way to contacts who themselves end up testing positive. Numbers are paired with explanations of what they show and why.

“Not all those who are reached are interviewed immediately,” the notes read next to a figure that shows 17% of contacts reached did not complete the interview, and then it lists some possible reasons, including a contact being too busy to talk or hard of hearing. It also notes that 27% of cases and 43% of contacts lacked phone numbers, and that “new efforts to obtain and validate phone numbers are being explored.” 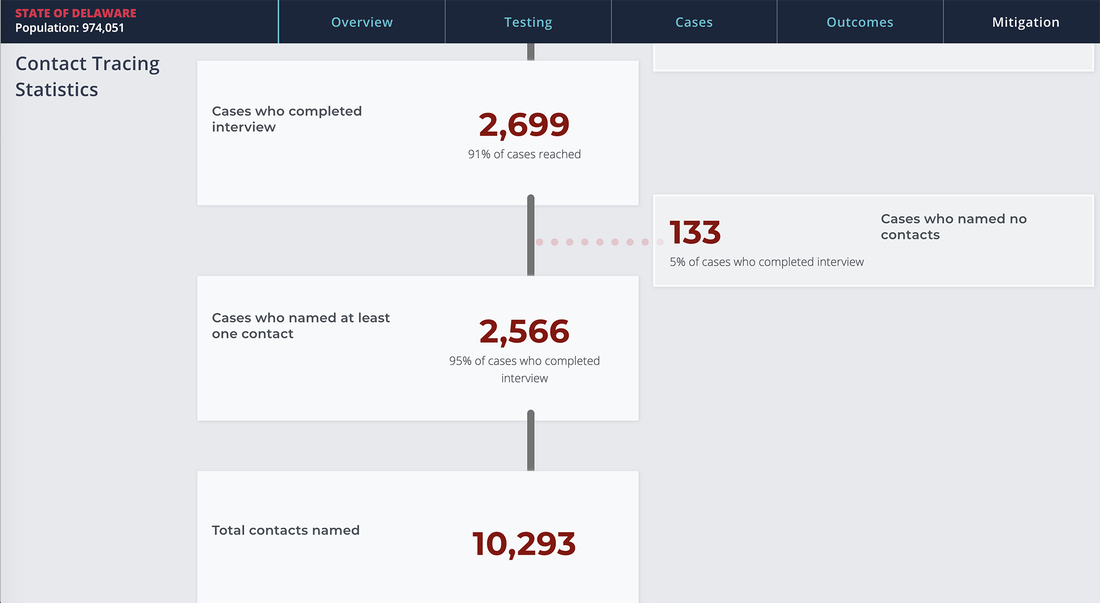 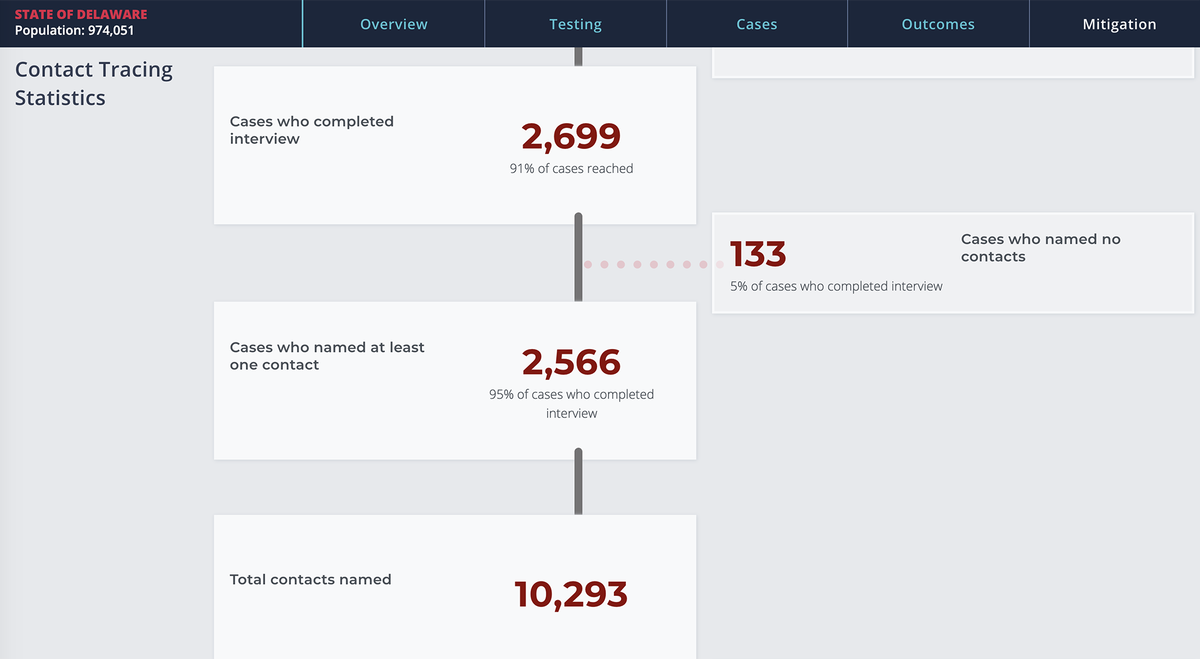 “I love that they have the summary statistics up front,” Watson says, noting that the percentage of contacts reached, the average number of contacts per case, and cases with known exposure to another case are all highlighted. The percent of cases with known exposure is 25%, much higher in Delaware than in D.C., which is at around 4%. (It’s tricky to do these kinds of comparisons, though, without standardized metrics.)

“I also love how they step through the process and provide data and explanation at every step,” Watson says. “It shows just how difficult it is to get in touch with people, but also how much work the health department is doing to carry it out.”

North Dakota was initially way out front in terms of contact tracing staff, according to NPR’s first survey of state health departments. In the latest survey published in early August, NPR’s analysis found that the state does not currently have enough contact tracing staff to keep up with new cases. 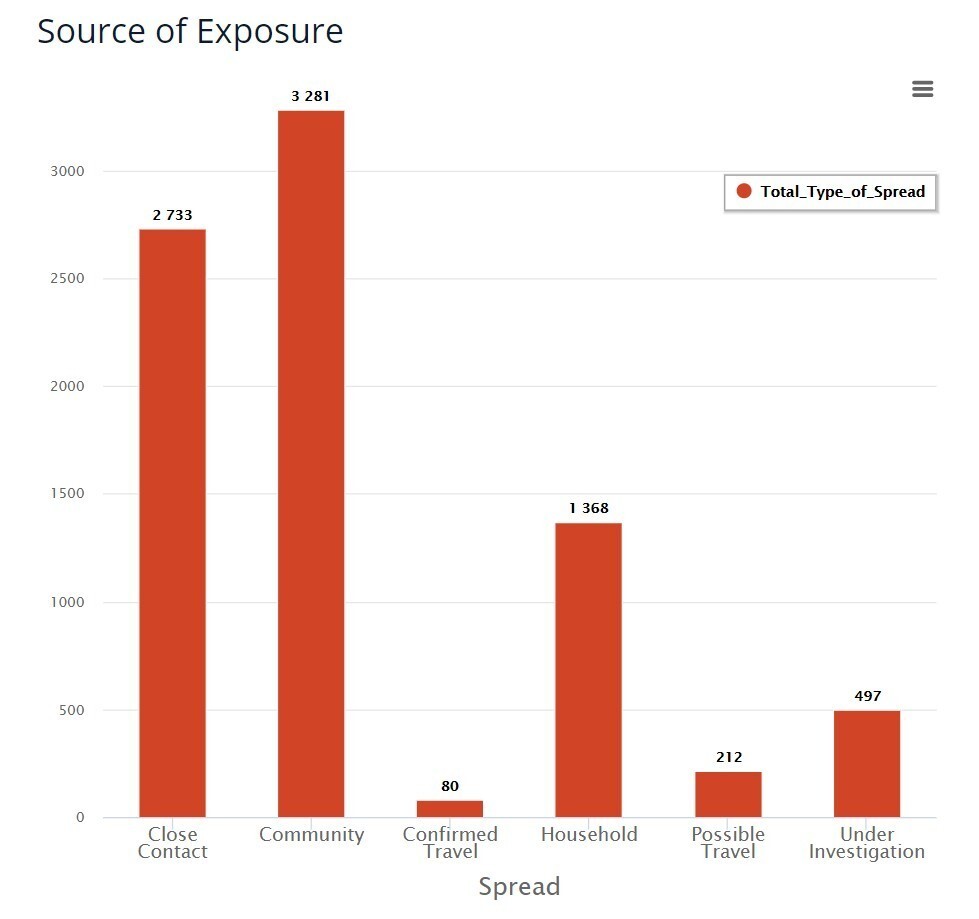 Now, the state appears to be using contact tracing data to identify sources of exposure for new cases.

“Their buckets are kind of broad,” Watson says. “It’s interesting that community transmission is higher than close contact transmission,” since close indoor contact is generally believed to be the main driver of COVID transmission. More specificity — like in Louisiana’s outbreak data — might help explain what these buckets mean in real life, she says.