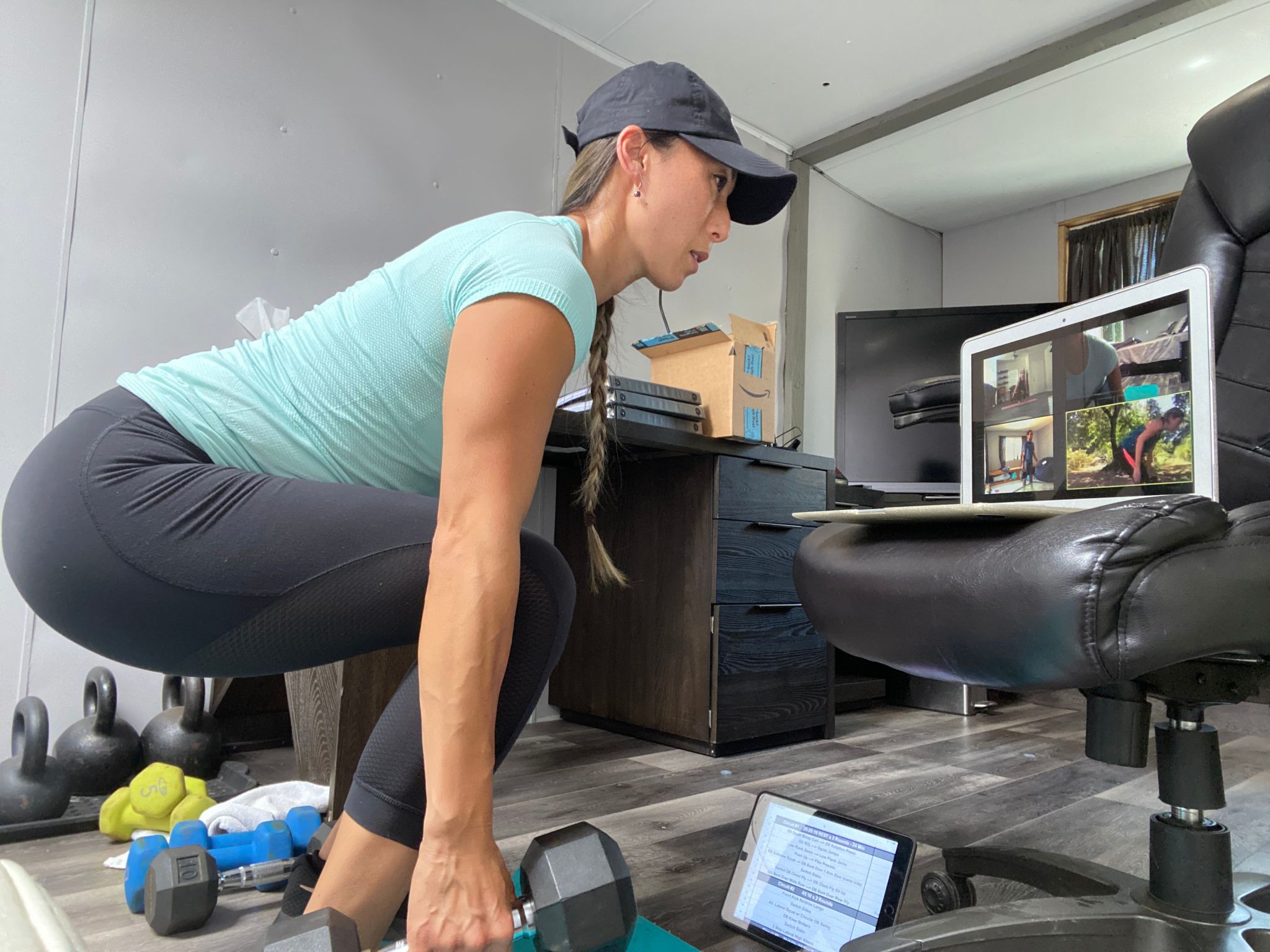 Gin Dietz of Morgan Hill posts fitness content on social media, with the added challenge of looking after her two children during the pandemic.

Gin Dietz of Morgan Hill posts fitness content on social media, with the added challenge of looking after her two children during the pandemic.

What’s an SF fitness influencer to do in the pandemic era?

I wasn’t one to workout before the pandemic, but since creators and trainers first started posting easy-to-follow at-home workouts this March, social media has become unavoidably inundated with a sea of fitness-y content.

Gyms are closed again in San Francisco, and even when they open for good, people may be hesitant to return, according to a study by RunRepeat.com. So for now — and for the foreseeable future — trainers, wellness influencers and health experts are all hopping on the virtual fitness train.

A number of well-followed influencers offer streams of unlimited free fitness content on their channels, but even for SF trainers whose followings are in the thousands, not millions, posts with free workout advice and strategies are key to bringing in new paying customers.

San Francisco-based Coach Rich Thurman III (@coach_rt3) thinks he lost half his face-to-face business when the stay-at-home order was invoked, but gained over 6,000 followers on Instagram. His strength and mobility education business, The Upgrade Guys, has grown by 1,500 on the same platform.

The shelter in place was an opportunity for Thurman and his Upgrade Guys business partner, Nat Viranond, to film content and rethink their branding, starting sponsoring Instagram posts. “The era of organic growth on social media is basically gone,” he said.

Natalie Carey (@barbellblondie), an SF personal trainer who’s all about inclusive, body positive training, has also been effectively diversifying her marketing strategy. Her social media following has been steadily increasing as a result. She’s also experimenting with more nostalgic ways to keep in touch with her clients. Sometimes Carey sends them snail mail to “put that extra tszuj into people’s experiences.”

Carey teaches online classes and offers financial assistance for those who can’t pay, but a staggering number of people have paid over the suggested price to help subsidize other people’s expenses. “There’s a lot of generosity out there right now,” she said.

Nic Knerr and Scott Forrester (@homewerkbnc) have been experimenting with the online world of fitness. After the closing of their Santa Monica home base, Circuit Works, they began teaching from the increasingly popular platform of Instagram Live. Now, they’re instructing together over Zoom from Santa Monica and Columbia, Maryland, on a link available on their public Instagram account. Knerr is building them a website.

“With the future of this looking so uncertain, I think one thing we can focus on is virtual training,” Knerr said. “I think it’s going to be around a lot longer.”

Trainers who were already primarily online are using the same at-home workout strategies that have brought them views for years. Cassey Ho (@blogilates) runs the wildly popular YouTube channel Blogilates from Los Angeles with over 5 million subscribers. She’s added 500,000 alone since the start of the pandemic, which is more than she might gain during months at a time in a slow season. She’s also forayed into TikTok, where she shares memes and workout moves, and has doubled her following there to 2 million since March.

Ho launched an app this summer with collections of follow-along exercise videos and calendars of workout plans.

“I’ve been planning and working on the Body by Blogilates app for months, but the current surge in home fitness definitely added a sense of urgency,” she said.

Gin Dietz (@fitwithgin) of Morgan Hill said she’s had to balance posting content on social media and taking care of her 3- and 6-year-old kids. Instead of spending hours a day creating free online content — which she says doesn’t always translate to payment — she has focused on continuing to train clients remotely, using apps like My Fitness Pal and Trainerize to keep tabs on their progress.

Forrester mentioned how online fitness can become a popularity contest — the gurus who have the best outfits and technology might get more views than trainers filming on their cellphones. Gyms, too, can be hard to compete with online.

“The market is oversaturated with online training,” Knerr said. “We’re more boutiquey. That’s what we have to offer.”

Fitness professionals were left with another choice recently, when conversations about systemic racism evoked by the most recent wave of Black Lives Matter protests manifested heavily on social media: post, or stay neutral.

Shauna Harrison (@shauna_harrison), a fitness instructor and adjunct public health professor at Johns Hopkins University, has been posting about racial injustice on her feed and in stories. She said she has lost followers as a result.

“I work for myself mostly, so I’m very vocal,” she said. “I don’t really care about the followers.”

Harrison said the fitness industry is facing a long-overdue reckoning about its lack of inclusivity. Some with health and disability issues can no longer safely attend gyms, others are not privileged enough to afford classes in the first place.

Thurman has also been consistently vocal about Black Lives Matter on Instagram. “I’ve been adamant about speaking openly about police brutality, Black Lives Matter, all these things, despite the fact that the fitness industry was being very quiet about these things and they are fearful about losing clients,” he said.

“I’m a firm believer that if you lose a client over that, that they just weren’t the right client,” he added.