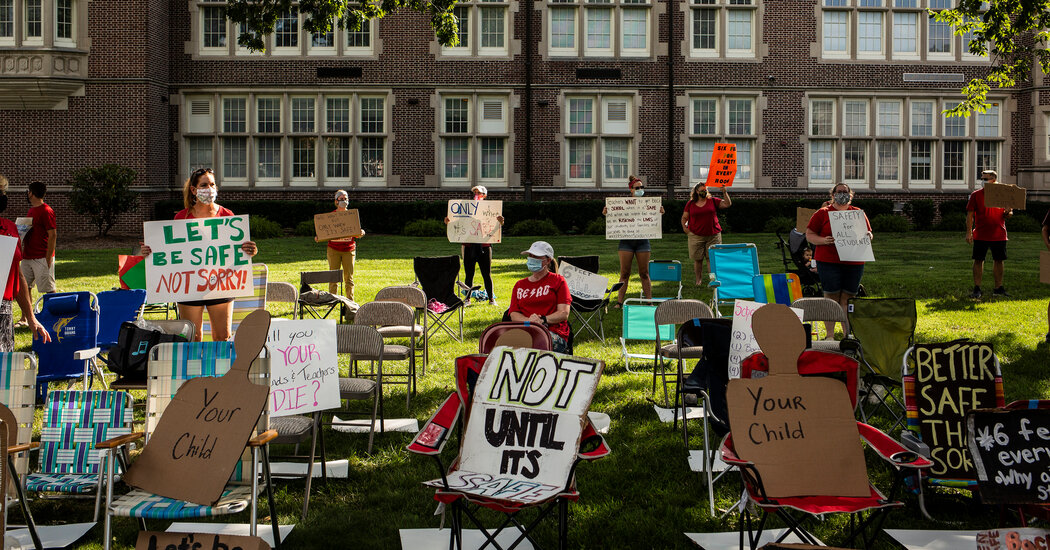 Just a few weeks ago it seemed that New Jersey, the state with the highest coronavirus death rate in the nation, was on the verge of reaching a crucial milestone.

After cutting the rate of transmission to one of the lowest levels in the country, the state was preparing to reopen all its schools for in-person instruction.

Districts that educate the state’s poorest children, including most of the large city school systems, were the first to pull the plug on face-to-face instruction.

Now, with less than two weeks before the start of school, growing numbers of affluent districts are following suit, citing teacher shortages, ventilation issues, and late-in-the-game guidance from the state on how to manage virus cases.

The frenzy of last-minute decision-making underscores the extreme challenge of reopening schools, not only in the United States, but worldwide, as shown by an outbreak in Israel after it was one of the first countries to bring students back into class.

On Wednesday, the superintendent of a regional district in Monmouth County, N.J., criticized Mr. Murphy’s fluctuating reopening strategy — what he called a “haphazard approach” — as he announced that schools would not reopen in spite of a summer-long effort to make that possible.

“He opened the door to a cascading series of events that placed intense staffing pressures on schools committed to opening,” the superintendent of Freehold Regional High School District, Charles B. Sampson, wrote in a letter to parents explaining the abrupt shift. “This poorly developed plan has had the distinct impact of forcing many districts to adopt a remote option regardless of community sentiment.”

A week earlier, the school district in Millburn, one of the state’s most affluent townships, cited the 79 staff members who had asked for waivers from in-person instruction as a key reason it was abandoning its ambitious reopening plan and switching to all-remote instruction.

The district in Livingston, the town next door, pointed to a domino effect that was leading to an insurmountable shortage of teachers.

“Multiple neighboring districts have announced that they will open the school year with remote learning,” Livingston’s superintendent, Matthew J. Block, wrote in a letter announcing all-remote instruction. “This trend has led to an increase in the number of our staff who are requesting child care leaves.”

Mr. Murphy, a Democrat, has said that a one-size-fits-all solution was impractical and that the state’s nearly 600 public districts needed flexibility to meet unique needs. New York State has taken a similar approach to reopening, permitting schools in Yonkers and Buffalo to open remotely, even as New York City still plans to bring students into class part time.

A vast majority of New Jersey’s districts are still moving ahead with plans for face-to-face instruction, said Mahen Gunaratna, a spokesman for Mr. Murphy. Sixty-six are even fully reopening to all students every day of the week.

“The Murphy administration has outlined clear public health and safety standards for school reopenings based on guidance from public health experts, while providing options for our nearly 600 school districts to craft plans that meet this guidance based on the needs of their individual school communities,” Mr. Gunaratna said in a statement.

The state’s poorest districts were the first to turn to all-remote instruction once given the option — in spite of the estimated 230,000 children across New Jersey who state officials have said lack either computers or internet access.

Last Monday, Newark’s schools, which educate more Black, Latino and low-income children than any other district in New Jersey, announced that classes would start the same way they ended in June: fully online. Most of New Jersey’s other large cities — including Jersey City, Elizabeth, Paterson and Camden — had already said they were planning an all-virtual start to the school year.

In some affluent suburban districts that still plan to reopen, tension is running high and plans are changing quickly.

Last week in Summit, teachers who were worried about the safety of a plan to reopen to all students, five days a week, held two sit-ins on the same day.

But by the second protest, they had to remake their signs: The district had suddenly announced that it was switching to a hybrid model of alternating days in school for middle and high school students. Under the current plan, elementary students will attend school every day.

“We’re still mystified how they’re going to bring 20 students into an elementary school classroom and keep them six feet apart,” said Wendy Donat, who teaches history at Summit High School and is vice president of the district’s teachers union.

Ms. Donat, who has been teaching for 29 years and said she does not fear for her own safety, got choked up when discussing her fundamental worry about the virus spreading among her colleagues and students.

“I’ve been to student funerals,” she said. “I would prefer not to go to any more.”

Districts that have canceled in-person instruction have faced the wrath of parents, many of whom are concerned about children’s deteriorating mental health as well as the challenges of working from home while children are learning remotely. The American Academy of Pediatrics has recommended that students be “physically present in school” as much as possible and has said there are major health, social and educational risks to keeping children at home.

Amanda Hudes, 38, moved into Scotch Plains, N.J., only months before the schools shut down in March, making the closure especially hard on her son, who is entering seventh grade.

She joined a parent protest last week to object to the school district’s abrupt decision to abandon its hybrid model and to shift to all-remote instruction, a change announced in an email sent at 10:03 on a Friday night.

The district, Scotch Plains-Fanwood, has said it lacks proper filters for its heating and cooling systems and cannot reopen safely.

In Rumson and Fair Haven, affluent Monmouth County towns that share a high school, more than 800 people have signed a Change.org petition proposing even more face-to-face instruction than the current model calls for.

National surveys have shown that white, suburban parents are twice as likely to favor in-person school.

The latest on how schools are reopening amid the pandemic.

Black and Latino parents, many of whom live in cities that were disproportionately ravaged by the virus, may have less access to quality health care or paid time off, intensifying their fear about a resurgence of the virus.

A recent poll from the Education Trust, a research and advocacy group, found that a larger percentage of Black and Latino parents than white parents in New York State were not planning to send their children back into classrooms this fall. In Elizabeth, N.J., which was among the first districts to switch to all-virtual instruction, 52 percent of parents said they did not intend to send their children to school, a spokesman said.

Still, the stakes are far higher for poor students, many of whom live in households where parents do not have the luxury to work from home or the means to pay for tutors to supplement gaps in online instruction. They often rely on school buildings for basic services like food, therapy and medical help.

Mr. Murphy’s original plan, released in late June, required districts to offer some in-person instruction. But on Aug. 12, under pressure from the teachers’ union, the governor said districts that were unable to open safely could offer online-only instruction.

He has continued to stress that most districts should try to provide some in-person instruction. Districts that are not opening their classrooms next month must explain the decision and set a new date for in-person learning.

But the initial response by schools was lopsided, with far more poor districts immediately announcing an all-virtual start to the school year while wealthier suburban districts prepared for some in-person instruction.

The uneven decisions have stoked fear that existing educational inequities between rich and poor districts will only worsen.

“It’s a failure at the state level,” said David Sciarra, executive director of the Education Law Center, a legal advocacy organization that filed the lawsuit known as Abbott v. Burke in 1981 on behalf of children in urban areas.

“It is simply inadequate for the state to issue guidance and say, ‘You’re on your own to figure this out,’” he added.

On Thursday, the Education Law Center sent a damning letter to the governor, top lawmakers and the state’s attorney general, blaming what it described as a hands-off approach for the 230,000 children who lack access to computers or the internet.

“The gaps in learning and instruction among these student populations that started in March are going to continue to grow,” Mr. Sciarra said in an interview.

Ronald Taylor, superintendent of the South Orange-Maplewood Schools, said a combination of factors had led his district in northern New Jersey to decide to operate remotely through the first marking period. Safety problems identified during classroom tours, concerns about air filtration and the nearly 60 teachers who had requested health exemptions led to a “tipping point,” he said, that made the choice clear.

A Wi-Fi antenna was installed on an area water tower to offer free internet access. And the district is working with the local Y.M.C.A. to offer extra day care in some empty classrooms, giving parents options similar to the small-group learning pods springing up in wealthy enclaves across the nation, he said.

“We are very concerned that those families that are most vulnerable — that it’s going to impact them to a greater extent,” Dr. Taylor said.