The list of registered COVID-19 vaccine providers in Wisconsin features hundreds of hospitals, pharmacies, doctors and health centers — and some cheesemakers.

Sargento Foods, a nearly 70-year-old cheese company founded in Plymouth, has started administering vaccine doses at its on-site wellness centers and is planning to soon host a mass vaccination site for other food production workers.

Meanwhile, Organic Valley, the largest farmer-owned organic cooperative in the nation, has started holding vaccination clinics for not just workers, but for any member of the community who is eligible.

It’s all hands on deck in America’s Dairyland, where the push to vaccinate people across the state is getting an unexpected boost from cheesemakers and dairy farmers.

Call it an effort to help reach, well, curd immunity.

“We want to get these vaccines to our employees, but we recognize that we’re all in this together,” said Jerry McGeorge, an official at Organic Valley, which is headquartered in La Farge. “And helping get it into these rural communities that we’re a part of is important to us as well.”

Wisconsin Gov. Tony Evers, whose first job was at a cheese company, praised the dairy industry for helping with the state’s vaccination efforts.

“As someone who spent time in a cheese factory scraping mold off of cheese, I couldn’t be prouder of the work our cheesemakers and dairy farmers are doing to support our state and get shots in arms faster so we’re not just bouncing back Gouda but better than we were before this pandemic hit,” Evers said in a statement. 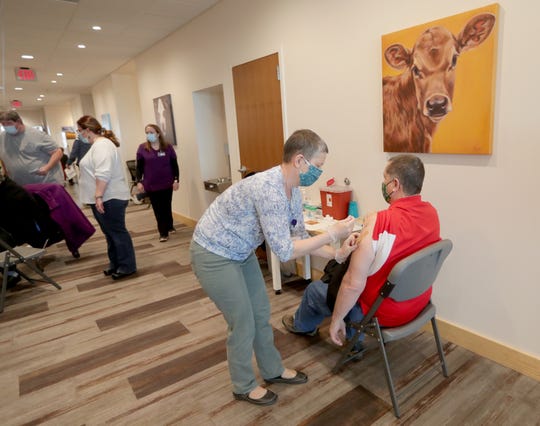 ‘We’re all in this together’

With COVID-19 safety signs reminding everyone to stay at least one cow apart, the crowd included a mixture of retirees, farmers, Organic Valley employees and others.

“I might be the first one because I saw the email and said, ‘Boom! Gotta get it done,'” Glen Hoff of Coon Valley, who works as a milk hauler for Organic Valley and an event planner, said as he checked in for his appointment shortly after 8 a.m.

Maurice Condon, a welder and farmer from Wonewoc, also arrived shortly after the doors opened. He and his wife, Amy, who works at Organic Valley, said they’d heard horror stories from other parts of the state about the scramble for vaccine, such as people selling appointments for shots.

The Condons, who raise cattle, chickens and pigs, said instead they got to sleep in until 5 a.m. and snuck in a few chores before their appointments.

“I just had to feed the cattle a little bit and make sure everybody was watered,” Maurice said. “They were happy.”

Apparently not even Arnold, the Condons’ 120-pound pig who sometimes gets loose and meets them at the end of their driveway.

McGeorge said Organic Valley — a co-op known for its milk, cheese and other dairy products, as well as meat and produce — got interested in hosting community-wide clinics while waiting for vaccine to become available.

“I think like a lot of people, you know, we were waiting and waiting,” he said. “But we also felt like anything we could do to help facilitate our workers — and actually beyond just our workers, but our community members — to get access to the vaccines, we wanted to help.”

The Organic Valley buildings in Cashton are surrounded by rolling hills and sprawling farm fields, many with grazing cows or horses, that spread across Monroe County — where the largest city is Sparta, which has about 10,000 residents.

Saturday’s vaccination clinic in Cashton was a joint effort with the Monroe and Vernon County health departments, along with Scenic Bluffs Community Health Centers. More than 400 doses of vaccine were administered. And because the health departments brought the doses with them, the co-op did not need to store vaccine at its facilities.

McGeorge added that many at Organic Valley, such as office staffers, have been working from home, and those who can’t work remotely have been getting an extra $2 an hour, known as “Hometown Hero” pay, since last March. Employees working in-person have also been getting free meals for the last year.

The co-op plans to host more clinics at its facilities with local health departments and health centers, and hopes to hold a larger event with Wisconsin National Guard when more vaccine becomes available.

“I really think we all have a responsibility as it relates to helping us on a community basis, state basis, and national basis, to get through this very challenging time that we’ve experienced this past year,” McGeorge said.

Many who showed up Saturday came from Monroe, Vernon and Juneau counties, and praised Organic Valley for opening its doors to the public — saying they’d been struggling to find appointments.

Monroe County, for example, is lagging much of the state when it comes to shots in arms, and is ranked 59th out of Wisconsin’s 72 counties when it comes to the percentage of the population that’s received at least one dose.

Kathleen Berg, 65, said Saturday’s clinic was a relief after the weeks of waitlists that she’d been facing. Berg, a retired housekeeper, has no connection to Organic Valley but heard about the clinic from staff at Scenic Bluffs Cashton clinic and was able to make an appointment over the phone.

“I was on quite a few other lists, and I just hadn’t heard,” she said. “All my siblings have had theirs, and I was the last one.”

Berg said she’s excited to be able to “get together and feel comfortable” seeing her family again.

Grande Cheese Company is known for its Italian cheeses, including mozzarella, provolone, ricotta and parmesan. Since last month, the Fond du Lac-based company also has been registered with the state as a COVID-19 vaccinator.

Grande already had health clinics at its seven facilities throughout Wisconsin, which are staffed by SSM Health practitioners. Those clinics typically offer everything from primary health care to flu shots for the company’s more than 1,000 employees.

Deciding to also offer COVID-19 vaccine shots at the clinics was a no-brainer.

“For us it was not a difficult decision to apply for this and we’re happy that we were authorized to become one,” said Maureen Toshner, who serves as Grande’s vice president of human resources. “We place a great emphasis on the health and well-being and safety of our associates, so that just made a lot of sense to us.”

It’s unclear how many Wisconsin companies have applied to be vaccinators, but cheese companies seem to be on the cutting edge.

“It was not difficult to apply, but there was — rightfully so — checks and balances,” Toshner said. “We had to make sure that we had the right refrigeration on the premises given the different vaccines. We had to explain different things about the supply chain and how that would work.”

She added that while the process was time-consuming, it helped her gain more confidence in the process.

Grande received 60 doses the week of March 1 and administered them to its workers who became eligible as food supply chain workers through Phase 1B of Wisconsin’s vaccine rollout, as well as any eligible spouses.

Grande received another 200 doses this week, and has expanded its vaccine distribution to include the farms it works with as well as their employees.

Fond du Lac County, where Grande is headquartered, has been lagging much of the state when it comes to COVID-19 vaccinations. It was ranked 50th out of 72 counties when it comes to the percentage of the population that’s received a first dose.

Grande also launched a campaign aimed at supporting independent and locally-owned pizzerias and Italian food restaurants during the pandemic to encourage people to patronize local shops.

“A very meaningful phrase in our mission and our culture is our constant pursuit of ‘to fulfill a purpose greater than ourselves,'” Toshner said. 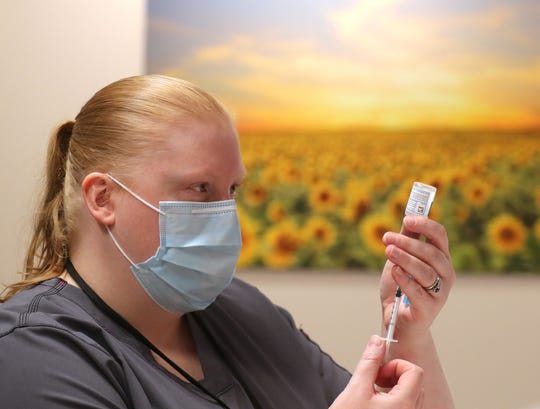 When the pandemic hit last spring, Newton-based Pine River Pre-Pack quickly instituted a mask policy. But when the company decided to require masks during the first week of April 2020, masks were hard to find.

So Laura Behm, the wife of Pine River’s general manager, Ian Behm, sewed about 300 cloth face masks for the company’s 25 employees and their families.

“Some of us had Green Bay Packers, some of us were wearing buck hunting masks, some of us wearing polka dots and pretty colors,” Ian Behm said. “We just took whatever we got and tried to do our best to try to supply our team with them because there was a shortage.”

When food production workers became eligible for the COVID-19 vaccine, Ian Behm and his brother, Chauncey Behm, the company’s director of operations, started helping employees sign up for vaccine appointments at Walgreens — and is paying them their hourly wages while they’re out getting shots.

Pine River also has donated thousands of pounds of cheese spread over the last year to local food pantries, the Behms said.

And the company produced about 500,000 pounds of cheese spread for the USDA Farm to Families food box program. 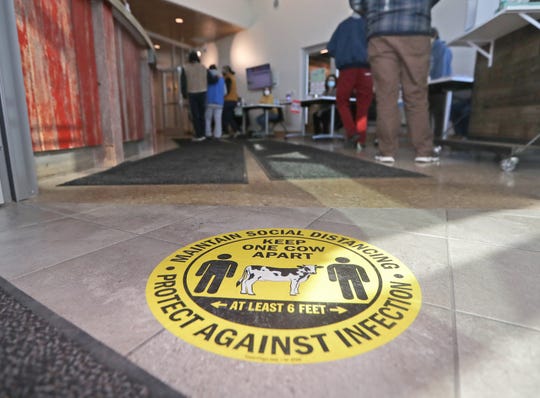 A sign on the floor directs people to “keep one cow apart” during a vaccine clinic at Organic Valley in Cashton. (Photo: Mike De Sisti / Milwaukee Journal Sentinel)

‘Tremendous power of people coming together’

Sargento Foods was approved by the state to administer the COVID-19 vaccine at its wellness centers, which are operated by Marathon Health, a workplace health care service.

Sargento also plans to work with Meijer pharmacies and other local companies to host a mass vaccination site for food production workers from as many as eight employers in the coming weeks, Sargento CEO Louis Gentine said in an interview.

“Collectively we’re all very excited about the opportunity to provide easy access for all of our employees,” said Gentine, whose grandfather started the company.

“I think what 2020 to me exhibited is just the tremendous power of people coming together to help each other out,” Gentine said.

Andrew Mollica and Daphne Chen of the Journal Sentinel staff contributed to this report.

Our subscribers make this reporting possible. Please consider supporting local journalism by subscribing to the Journal Sentinel at jsonline.com/deal.