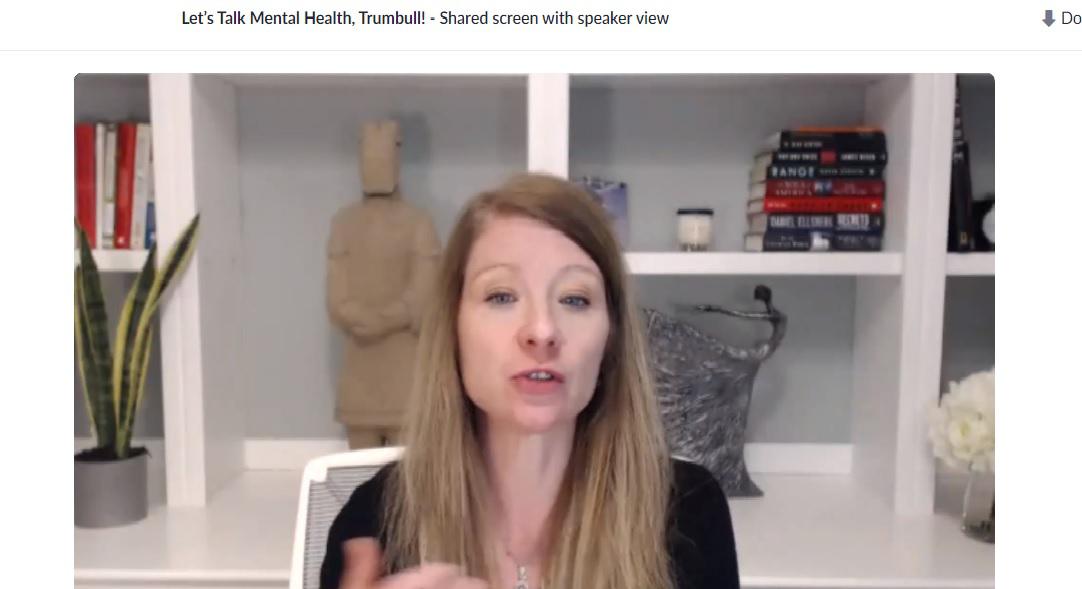 TRUMBULL — A few short years after Valerie Barton and her husband adopted their son from Russia, they started to notice that he was having a hard time.

He had been adopted at the age of 21/2 in 2006. By the time he was 4, “my husband and I had noticed some strange, kind of troubling, puzzling behaviors and he really began to struggle and it was very frightening,” said Barton, executive director of The Youth Mental Health Project, a national organization based in Darien.

“We would regularly get calls from preschool teachers talking about how his behavior, while not violent, was upsetting to other children.”

Eventually, Barton’s son was diagnosed with multiple mental health issues, but her path to helping and healing him was incredibly difficult, and took years.

“We felt judged as parents, because we were being judged,” she said. “We were doing everything we possibly could do to help our child and he was still suffering and it was incredibly isolating and very very difficult.”

Barton spoke Wednesday at the first installment of the new program “Let’s Talk Mental Health, Trumbull.” The program is a monthly speaker series, featuring experts from the field of mental health.

It was started by TPAUD, Trumbull’s Prevention Partnership in collaboration with many of its partners, including Trumbull EMS, the Mary J. Sherlach Counseling Center, Trumbull PTA Council, My Friend Abby, Confidant Health, and Lakewood Trumbull YMCA.

The purpose of the program is to provide a place where people learn about mental health issues, ask questions, and be directed to resources.

Trumbull First Selectman Vicki Tesoro said mental health is an area that needs to be addressed more frequently and with honesty and compassion.

“Through this series we hope to highlight and demystify mental health topics,” she said. “Many of our families are faced with mental health struggles and we want to offer authentic dialogue to open the conversation so we can support each other.”

Barton talked about the prevalence of mental health problems among children and young adults, and how parents and other caregivers can make a difference. The Youth Mental Health Project helps families in a variety of ways, including providing a parent support network that offers peer support to parents coping with a child’s mental health struggles.

Barton came to the program due to her own struggle with her son. She said she knows she’s not alone, as millions of families nationwide deal with many of the same hurdles that she did.

One thing she’s learned, is that it’s important to become an advocate for your child’s mental health.

“You know your child better than anyone else and you know what they need,” Barton said. “You have to advocate for them.”

She said it’s important for people to know they aren’t alone. Throughout her presentation she referenced statistics showing how prevalent mental health issues are in young people. That included data from UNICEF released in 2019 that compiled information from 204 countries showing that, globally, almost 43 percent of those age 10 to 19 reported anxiety or depression.

She said there is a scarcity of mental health treatments available throughout the country. And part of the reason why, Barton said, is that people need to make more noise about the importance of treating mental health conditions.

“When I was growing up in the 1970s, cancer was the ‘Big C,’ ” Barton said. “People didn’t want to talk about it. What happened over time is that cancer survivors began to speak.”

The more they talked about cancer, the more support the illness received and the more money and resources were funneled toward preventing and treating cancer.

“We can apply this playbook to youth mental health,” Barton said.

The COVID-19 pandemic has made the importance of mental health undeniable, she said, and one of the positive pieces of that is that the issue is getting more media coverage and more attention from groups such as the ones that put together “Let’s Talk Mental Health, Trumbull.”

“We are here because community organizations in Trumbull are getting together to talk about this,” Barton said. “We will do better for our kids and grandkids. We must. There is no alternative.”